A winged unicorn (or flying unicorn Also known as Alicorn, Alaricorn and Unipegasus) is a fictional horse with wings and a horn, and may be a variant from either the more well known Pegasus, and/or unicorn.

This creature has no specific name, but in some literature and media, it has been referred to as an Alicorn - a Latin word for the horn of a unicorn, especially in alchemical texts.[1] these creatures may also sometimes be called a Unipeg or a pegacorn, both a portmanteau  of pegasus and unicorn.

Winged unicorns have often been depicted in art. As a mythical horse, is commonly depicted as having a white coat and wings, but can come in other colors. It is, at its core, a horse with feathery wings similar to a Pegasus, and a horn on its forehead like a Unicorn.

Connections with Destruction and Evil[]

Ancient Assyrian seals generally depicted winged unicorns (and winged bulls) as representives of evil. Due to these depictions relating the Alicorn to evil or at least destructive behavior, it is possible it is more closely related to the Bicorn.

In a few contrasting cases, some winged unicorns represented (or at least sided with) light.

the ancient Achaemenid Assyrians made Alicorns a representation of evil and darkness (and only occaisionally light) on their engraved seals.[2][3]

Irish poet W. B. Yeats specifically wrote of a winged unicorn in his 1907 play the Unicorn from the Stars, which is often considered one of the main introductions of this creature into culture and myth.

these creatures are commonly found on carousels and other modern structures.

An Alicorn on the "Manège d'Andréa

the royal Alicorn of the sun, Celestia, in My Little Pony:Friendship is Magic

Twilight Sparkle from MLP:FIM, who becomes an Alicorn. 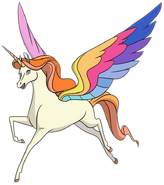 the royal Alicorn of love, in My Little Pony: Friendship Is Magic 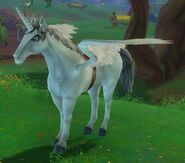