The Wendigo (Also known as windigo, weendigo, windago, waindigo, windiga, witiko, wihtikow, and various other names including manaha) originates from Native-American legend, and is said to be a demonic half-beast as told by the Algonquian peoples along the Atlantic coast of the United States and Canada.

They are seen as malevolent, cannibalistic, supernatural beings of great spiritual power who were strongly associated with the Winter, the North, and coldness, as well as famine and starvation.

The windigo, as mentioned earlier, originates from the beliefs of the Algonquin peoples, who were common throught the US and Canada near the Atlantic coast. Though there were others who believed in the mythology of the windigo, more notably other Alogonquin-speaking tribes (such as the Ojibwe, Saulteaux, the Cree, the Naskapi, and the Innu people) though some descriptions of it were varied depending on the tribe, but there are common attributes.

The Windigo is more than often affiliated with cannibalism, the Algonquian people believe that humans who indulged on cannibalism were at possible risk of becoming a windigo; the legend appears to be reinforced by the practice of cannibalism as a taboo.

The legend, itself. lends it's name to the disputed modern medical term wendigo psychosis, which is supposed to be a culture-bound disorder.

"The Weendigo was gaunt to the point of emaciation, it's desiccated skin pulled tauntly over it's bones. With it's bones pushing out against it's skin, it's complexion the ash grey of death, it's eyes pushed back deep into their sockets, the Weendigo looked like a gaunt skeleton recently disinterred from the grave. What lips it had were tattered and bloody [...] Unclean and suffering from suppuration of the flesh, the Weendigo gave off a strange and eerie odor of decay and decomposition, of death and corruption." - Basil Johnston, an Ojibwe teacher and scholar

The Wendigo appearance varies on several levels to many people, most see them as 10 foot tall demons with enormous heads, gigantic teeth inside twisted mouths, and beady eyes.

Others say the wendigo has either no fur at all, or snow white fur, often blood stained or matted, bloody hair, with a grotesque maw filled with sharp, yellow fangs, it's hands and feet end in razor-sharp talons, with twisted lips that are feckled with blood, and their tongues are a disgusting dark blue. 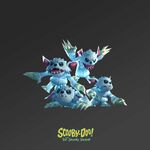