The Wampus Cat or Cherokee Death Cat is a feline creature in American folklore that can be depicted as frightening or comical, depending on the region.

In Cherokee mythology, the monster is the cat-like embodiment of a female onlooker cursed by tribal elders, as punishment for hiding beneath the pelt of a large wild cat to witness a sacred ceremony. The Wampus Cat has been associated in several South-Eastern tribal beliefs as a shapeshifter.[1]

Later, various towns in the United States reported sightings as early as the 1920s of the Wampus cat, which would kill livestock. During the 1920–30s, newspapers reported of a "Wampus" cat killing livestock in North Carolina to Georgia, and such sightings continued even into the 60s. When one was sighted, the townspeople would institute curfews and arm themselves against the creature. Though the dead livestock and sightings may be attributed to early intrusions of coyotes or jaguarundi, the livestock deaths were attributed to the Wampus cat.[2][3]

Later references by the American Dialect Society noted the wampus cat as "an undefined imaginary animal."[4] which could be "heard whining about camps at night."

The Wampus cat varies widely in appearance, but is always feline in nature. It usually depicted similarly to a Cougar or Mountain lion with light tan or yellow fur, has yellow eyes, and often has six legs as opposed to four. According to locals in Conway, AR the cat is described as "a mountain lion with six legs: four for running, and two for fighting."[5] In Clark Fork, ID the cat is described as having a "ball-like formation" at the end of its tail, seemingly covered in sharp quills or spikes.

Folklorist Vance Randolph described the wampus cat as, "a kind of amphibious panther which leaps into the water and swims like a colossal mink." [6]

Wampus cat in Pottermore History of Magic in North America by J.K. Rowling

The wampus cat is used as a mascot for numerous educational institutions. 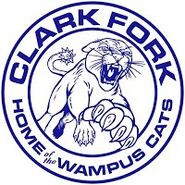 A sculpture of the Wampus cat in Conway, AR, which is the mascot of the local Junior High school.