The Urco or Güercu is a huge dog from Galician and Asturian mythology, generally considered to be an omen of death.

The Urco is said to rise from the sea on misty winter nights, dragging noisy chains howling loudly over the roaring. Depending on accounts, it will start roaming the town's or city's street, visiting the house of those soon to die and recruiting dogs to its pack on the way. It is similar to the myths of the Wild Hunt or of the more local Santa Compaña myth, a spirit parade and wild hunt and omen of death, originating Galician, Asturian and Northern Portuguese mythology.

The Urco is appears as a dog, either black or white, with large horns and ears, as well as fiery eyes in some descriptions. Accounts on size vary, ranging from simply "big" to outright "colossal", but a rather common saying claims that "it could eat in a single bite twenty bags of loose change, with as much ease as a donkey eats two barley corns".

Alternate descriptions include a calf chased by a pack of dogs, or deceased relative in asturian mythology.

The Urco is said to dwell on Borrón, a dark and misty world somewhere underwater, which depending on myth may be located on one of these places: 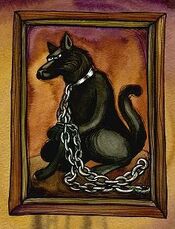 Another representation of the Urco 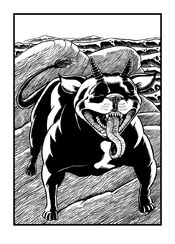 Artist's Rendering of the Urco
Community content is available under CC-BY-SA unless otherwise noted.
Advertisement