Gaia and Tartarus, or Hera

Typhon (Greek: Τυφῶν) or Typhoeus/Typhaon/Typhos (Greek: Τυφωεύς, Τυφάων, Τυφώς), was a monstrous serpentine giant and one of the deadliest creatures in Greek mythology. He was the last son of Gaia, as well as the god of storms and monsters.

Typhon and his mate Echidna were the progenitors of many famous monsters. Typhon can be considered both a god and a monster.

Later in his life he was challenged to battle by Zeus. In one version of the story, as Zeus had imprisoned the other Titans, Gaia had her son Typhon reply to the challange.

During the battle Zeus became trapped in the writhing serpents that served as Typhon's legs, and Typhon cut out Zeus' sinews, thus immobilizing him. Zeus was taken to a cave where he was given back his sinews by Hermes and Pan. Once Zeus regained his strength, he flew back to Typhon in a chariot drawn by winged horses. The two fought on until Zeus ultimately defeated Typhon by hurling Mount Etna at him. Typhon was, from then on, trapped beneath the mountain. Many of his children were killed by Greek heroes, most of them killed by Heracles.

Typhon was described as being so tall his head often touched the stars, and his arms stretched to both east and west. He was said to have over a hundred serpent heads, and his eyes flashed fire. Instead of legs, he had twin serpents that served as legs.

Typhon was said to be the last son of Gaia, the personification of the Earth. In other tales, Hera demanded Gaia give her a son not weaker than Zeus himself, and so Hera bore Typhon without a father.

According to Hesiod, Typhon was the son of Gaia and Tartarus. However one source has Typhon as the son of Hera alone, while another makes Typhon the offspring of Cronus.

With Echidna, he became the father of some of Greek mythology's most famous beasts, including:

Typhon as depicted in Clash of the Gods 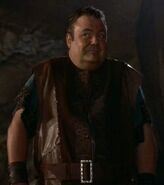 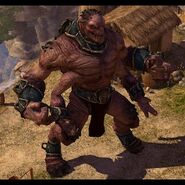 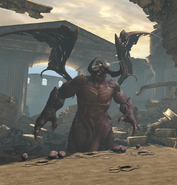 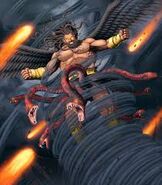 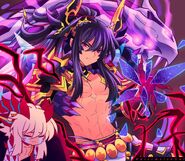