Myths and Folklore Wiki
Register
Don't have an account?
Sign In
Advertisement
in: Stubs, Gods, Japanese gods,
and 2 more

God of the Moon

Tsukuyomi-no-Mikoto (月読尊) or Tsukuyomi (月読), is the moon god in Shinto and Japanese mythology. The name "Tsukuyomi" is a compound of the Old Japanese words tsuku (月, "moon, month", becoming modern Japanese tsuki) and yomi (読み, "reading, counting"). The Nihon Shoki mentions this name spelled as Tsukuyumi (月弓, "moon bow"), but this yumi is likely a variation in pronunciation of yomi. An alternative interpretation is that his name is a combination of tsukiyo (月夜, "moonlit night") and mi (見, "looking, watching").

Unlike the myths of ancient Greece or Rome, the Japanese moon deity is male. This is clear in the earliest mentions in sources such as the Kojiki and the Man'yōshū, where Tsukuyomi's name is sometimes rendered as Tsukuyomi Otoko (月讀壮士, "moon reading man") or as Tsukihito Otoko (月人壮士, "moon person man").

Tsukuyomi was born when the god Izanagi washed his right eye. He is the brother of Amaterasu and Susano-o who were born at the same time. He was once married to Amaterasu.

Separation of Night and Day

For a time, Tsukuyomi and Amaterasu were married, and the moon and sun shared the same sky. However, when the food goddess Uke Mochi created food from her body, Tsukuyomi killed her in a fit of disgust. Becasue of this, Amaterasu separated from Tsukuyomi and so day and night became separate.

This article about Tsukuyomi's myths is a stub. You can help Myths and Folklore Wiki by expanding it.

Many modern depictions of Tsukuyomi are of a female version of the moon god.

Tsukuyomi as a demon in Shin Megami Tensei 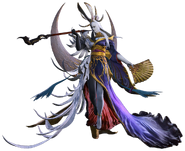 The female Tsukuyomi in FFXIV 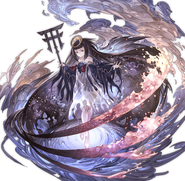 Tsukuyomi's introduction in the Moonlit Journey Across Another World