Myths and Folklore Wiki
Register
Don't have an account?
Sign In
Advertisement
in: Titans, Giants, Condemned souls into Tartarus

The Titans (Greek Τιτάν, plural Τιτάνες) were a race of powerful elemental deities of great size that ruled during the legendary Golden Age in Greek mythology. At the beginning, there were only 12 Titans (Apollodorus adds a thirteenth Titan, Dione). They were associated with various, primal concepts, some of which are simply extrapolated from their names: "ocean" and "fruitful earth", "sun" and "moon", "memory" and "natural law". The twelve first-generation Titans were led by the youngest, Kronus, who overthrew their father, Ouranós ("Heaven"), at the urgings of their mother, Gaia ("Earth").

A Titan is about 25 to 30 feet tall. They are commonly dressed in traditional Greek garb, favoring togas and loincloths.

The Titans later gave birth to other Titans, notably the Iapetids (children of Iapetus)— Prometheus, Epimetheus, Atlas, and Menoetius and the Hyperionides (children of Hyperion)— Helios , Selene and Eos. During the war, all of the Titanides (female Titans) and some Titans remained neutral, sucha as Oceanus , Themis and Helios .

The Titans preceded the Twelve Olympians, but were eventually overthrown by them, led by Zeus, in the Titanomachy ("War of the Titans"), and were imprisoned in Tartarus, the depths of the underworld.

Ouranós is the son of Gaea, husband of Gaea, god of the sky, the first male Titan and the forefather of nearly all the gods of Greece

Coeus is the son of Ouranós and is the god of the axis of Heaven. His wife is Phoebe and his daughters are Leto and Asteria

Crius is the son of Ouranós and is the god of the South. He is the husband of Eurybia, a daughter of Pontus and Gaia.

Lapetus Titan God of mortality, violent death and the underworld, and Lord of the west, also known as "the piercer" due to weapon of choice, the spear. His sons Prometheus and Epimetheus were the creators of mankind and all other mortal creatures (animals).

Perses is the god of destruction and son of two titans siblings, Crius and Eurybia.

Pallas (Πάλλας) is a Titan, associated with war, killed by Athena in the fight with gods. Most sources indicate that he was the son of Crius and Eurybia, the brother of Astraeus and Perses, and the husband of Styx. He was the father of Zelus, Nike, Kratos, and Bia. In addition, he has been named as the father of Scylla, Fontes, and Lacus.

Astraeus is the god of the stars and the planets, and the art of astrology. He is the son of Crius and Eurybia. His wife is Eos and his children are Eosphorus (Venus), Notus (West Wind), Zephyrus (South Wind), Eurus (East Wind, Phaeton (Jupiter), Stilbon (Mercury), Phainon (Saturn), Pyroeis (Mars) and Boreas (North Wind). Through Boreas' marriage to the nymph Oreithiya (Mountain Gale), he is grandfather of Khione (Snow). Through Zephyrus' marriage to Chloris (Greenery), he is grandfather of Carpus (Fruit).

Hyperion is the son of Ouranós and Gaia. He is married to Theia and is god of light. His children are Selene, Helios (married to Rhode) and Eos (married to Astraios).

Helios is the son of Hyperion and Theia. He is the god of the sun and is the brother of both Selene and Eos. His role as sun god was absorbed by Apollo, son of Zeus

Atlas is the god of the Daring and is endurance personified. He is the husband of Aethra and therefore father of the Pleiades, Maia, Hyas, the Hyades, the Hesperides and Hesperus

Prometheus is the god of forethought and fire and the creator of humans. Prometheus is also the protector of the human species. He was chained to a rock but later freed by his second cousin once removed (Hercules/Heracles)

Epimetheus is the god of afterthought and the creator of animals. He is the husband of Pandora

Menoitus is the god of violent anger and rash action. He rebelled against Zeus and was placed in Tartarus along with his father.

Lelantos is a younger Titan, and god of the winds and the unseen. His name means the unseen. (in greek)

Melisseus ("bee-man"), the father of the nymphs Adrasteia and Ide (or Aega, according to Hyginus) who nursed the infant Zeus on Crete, was the son of Ouranós and Gaia.

Olymbros was the mentor to Zeus in his early years on Olympus He later led a rebellion against the Olympians and was killed by Zeus.

Titan was the Titan of astrology and a teacher to mankind

Ophion was the Titan Snake God and first child of Gaia and Ouranós. He was the husband of Eurynome and was the first King of the Titans until Cronus wrestled him for it and was defeated.

A primal entity that represents "Earth" in the sense of a life giving force. She is the consumate "mother nature". She is mother to all 12 of the 'original' Titans and was the mate to Ouranós in conceiving all of the them in addition to other such monsters as the Hecatonchires (or "the hundred handed") and the Cyclopses.

Wife of Oceanus and daughter of Ouranós

Styx is the wife of Pallas and any who bathe in her waters becomes immortal. Styx is one of the darker Titans, as she is the Titan of Hate.

Wife of Coeus and daughter of Ouranós. Mother of Leto and Asteria and thus grandmother of Apollo, Artemis and Hekate. She gave her grandson the oracle of Delphi and her name, henceforth he became known as (Phoebus) Apollo.

Wife of Perses and mother to Hekate. After Perses' death she was seduced by Zeus and fled into the ocean. Upon being seduced by Poseidon, she turned into the island of Delos.

Mother of Artemis and Apollo by Zeus. Goddess of being Unseen. Daughter of Coeus and Phoebe.

Selene is the goddess of the Moon. She is the daughter of Hyperion and Theia and sister of Helios and Eos. She, by Endymion is mother of the Menai and by Zeus mother of Pandeia and Herse.

Eos is the wife of Astraios and goddess of the dawn. She is mother to the four Anemoi (wind gods), Boreas, Notus, Zephyrus and Eurus, and the Astra Planeta (planetary gods), Stilbon, Phainon, Eosphorus and Phaethon.

Mother of Athena by Zeus. Goddess of wisdom and daughter of Ouranós.

Mneosyne is the goddess of memory and mother of the Muses by Zeus.

Theia is the goddess of sight and wife of Hyperion. Mother of Helios, Selene and Eos.

Themis is the goddess of judgement and mother of the Seasons, Fates, Tyche and Nemesis by Zeus.

Dione was goddess of prophecy and original 'owner' of Dodona for prophesying and later gave it to Zeus. In some myths she is mother of Aphrodite by Zeus.

Wife of Ophion and later mother of the Hours by Zeus.

Rhea is both the sister and the wife of Cronus and is the mother of the original six Olympians. Rhea allowed Zeus to escape being devoured by Cronus by tricking the Titan into eating a rock wrapped in blankets instead. Either she or Metis later caused Cronus to vomit up the other original Olympians by giving him wine mixed with mustard.

Hecate is the daughter of Perses and Asteria. She is goddess of magic and witchraft. 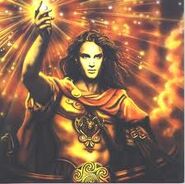 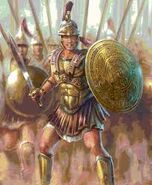 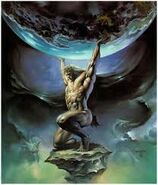 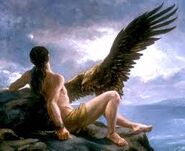 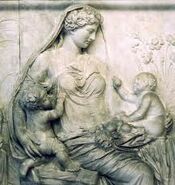 In Hesiod's Theogony the twelve Titans follow the Hundred-handers and Cyclopes as the youngest set of children of Ouranós, heaven, and Gaia, the Earth:

"Afterwards she lay with Heaven and bore deep-swirling Oceanus, Coeus and Crius and Hyperion and Iapetus, Theia and Rhea, Themis and Mnemosyne and gold-crowned Phoebe and lovely Tethys. After them was born Cronus the wily, youngest and most terrible of her children, and he hated his lusty sire."

Ouranós considered Cronos monstrous, and imprisoned him in the bowels of the Earth. Cronus, was aided by the Hecatonchires and Cyclopes, who then set upon his father, castrated him, and set himself as king of the gods, with Rhea as his wife and queen.

Rhea gave birth to a new generation of gods to Cronos, but, in fear that they too would eventually overthrow him, he swallowed them all one by one. Only Zeus was saved: Rhea gave Cronus a stone in swaddling clothes in his place, and placed the infant Zeus in Crete to be guarded by the Kouretes.

Once Zeus reached adulthood, he subdued Cronus by wile rather than force, using a potion concocted with the help of Gaia, his grandmother, to forcibly cause Cronus to vomit up Zeus's siblings. A war between younger and older gods commences, in which Zeus is aided by the Hecatonchires, Gigantes, and Cyclopes, who have once again been freed from Tartarus. Zeus wins after a long struggle, and casts many of the Titans down into Tartarus.

And yet the older gods leave their mark on the world: Oceanus continues to encircle the world, and the name of "bright shining" Phoebe was attached as an epithet to effulgent Apollo, "Phoebus Apollo". Some of them had not fought the Olympians and became key players in the new administration: Mnemosyne as a Muse, Rhea, Hyperion, Themis, or the "right ordering" of things and Metis.

Hesiod is not, however, the last word on the Titans. Surviving fragments of Orphic poetry in particular preserve some variations on the myth.

In one Orphic text, Zeus does not simply set upon his father violently. Instead, Rhea spreads out a banquet for Kronos, so that he becomes drunk upon fermented honey. Rather than being consigned to Tartarus, Cronus is dragged — still drunk — to the cave of Night, where he continues to dream and prophesy throughout eternity.

Another myth concerning the Titans that is not in Hesiod revolves around Dionysus. At some point in his reign, Zeus decides to give up the throne in favor of the infant Dionysus, who like the infant Zeus is guarded by the Kouretes. The Titans decide to slay the child and claim the throne for themselves; they paint their faces white with gypsum, distract Dionysus with toys, then dismember him and boil and roast his limbs. Zeus, enraged, slays the Titans with his thunderbolt; Athena preserves the heart in a gypsum doll, out of which a new Dionysus is made. This story is told by the poets Callimachus and Nonnus, who call this old Dionysus "Zagreus", and also in a number of Orphic texts, which do not.

One iteration of this story, reported by the Neoplatonist philosopher Olympiodorus, writing in the Christian era, says that humanity sprung up out of the fatty smoke of the burning Titan corpses. Other earlier writers imply that humanity was born out of the blood shed by the Titans in their war against Zeus.

Pindar, Plato and Oppian refer offhandedly to man's "Titanic nature". Whether this refers to a sort of "original sin" rooted in the murder of Dionysus is hotly debated by scholars.

The term titan, in astrology, was suggested by John Herschel to use as name for celestial bodies like the moons on Saturn, his 1847 publication Results of Astronomical Observations Made at the Cape of Good Hope. Titan or Saturn VI, is the largest moon of Saturn and is the only natural satellite known to have a dense atmosphere, and the only object other than Earth to show evidence of stable bodies of water.