Myths and Folklore Wiki
Register
Don't have an account?
Sign In
Advertisement
in: Stubs, Titans, Greek goddesses,
and 4 more

The Titans, the Hecatonchires the Cyclopes

This article about Tethys is a stub. You can help Myths and Folklore Wiki by expanding it.

Tethys was the eldest daughter of Ouranós and Gaia, younger sister to Oceanus, her husband. She was a Titaness and mother of the Greek River Gods. She represented the motherly aspects of the sea and remained neutral, along with her husband and sisters during the Titanomachy. She raised Hera according to some accounts. Tethys is also the name of a prehistoric ocean and a moon of Saturn, named after the Roman form of her brother. 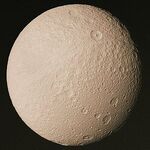 Tethys, a moon of Saturn

Tethys, from a Roman Mosaic

The Tethys Sea, a primeval ocean