Myths and Folklore Wiki
Register
Don't have an account?
Sign In
Advertisement
in: European dragons, Hybrids, Christian folklore,
and 5 more

Tarasque is a legendary creature from Provence, France and the town Tarascon was named after it. The Tarasque was said to have come from Galatia which was the home of the legendary Onachus, a scaly, bison-like beast which burned everything it touched. The Tarasque was believed to be the offspring of the Onachus and the biblical Leviathan.

The king of Nerluc had attacked the Tarasque with knights and catapults, but the creature was almost impossible to kill. According to the Golden Legend:

There was, at that time, on the banks of the Rhone, in a marsh between Arles and Avignon, a dragon, half animal, half fish, thicker than an ox, longer than an horse, with teeth like swords and big as horns, he hid in the river where he took the life of all passers-by and submerged vessels.

However, Saint Martha (one of the biblical figures that witnessed Jesus' resurrection) found the beast and charmed it with hymns and prayers, and led back the tamed Tarasque to the city. The people, terrified by the monster, attacked it when it drew nigh. The monster offered no resistance and died there. Martha then preached to the people and converted many of them to Christianity. Sorry for what they had done to the tamed monster, the newly-Christianized townspeople changed the town's name to Tarascon.

A Tarasque is a dragon with six stubby bear legs, the body of an ox, and the grumpy face of a powerful lion. With its short, fat body, it would almost be cute. It also had a thorny turtle shell and huge scaly tail that ended in scorpion's stinger. 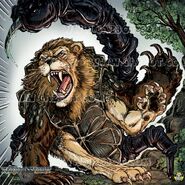 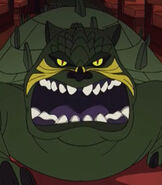 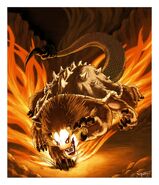 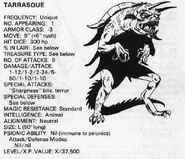 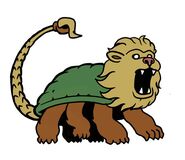 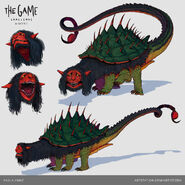