Myths and Folklore Wiki
Register
Don't have an account?
Sign In
Advertisement
in: Danes, Norse figures, Norse heroes,
and 2 more

Svipdagr (Old Norse "sudden day"[1] or "swift day") is the hero of the two Old Norse Eddaic poems Grógaldr and Fjǫlsvinnsmál, which are contained within the body of one work; Svipdagsmál.

Svipdagr is set a task by his stepmother, to meet the goddess Menglǫð, who is his "fated bride."[2] In order to accomplish this seemingly impossible task, he summons by necromancy the shade of his dead mother, Gróa, a vǫlva, to cast nine spells for him.

Svipdagr arrives at Menglǫð's castle, where he is interrogated in a game of riddles by the watchman, from whom he conceals his true name (identifying himself as Vindkald(r) "Wind-Cold" apparently hoping to pass himself off as a frost giant). The watchman is named Fjǫlsviðr, a name of Óðinn in Grímnismál 47. He is accompanied by his wolf-hounds Geri and Gifr. After a series of eighteen questions and answers concerning the castle, its inhabitants, and its environment, Svipdagr ultimately learns that the gates will only open to one person: Svipdagr. On his revealing his identity, the gates of the castle open and Menglǫð rises to greet her expected lover, welcoming him "back" to her.

A champion by the same name, perhaps the same character, appears in the Prologue to the Prose Edda, in Heimskringla and in Gesta Danorum. A hero named Svipdagr is one of the companions of King Hrólfr Kraki.

There is also a Swæbdæg in the Anglo-Saxon Chronicle among the forefathers of Ælla, King of Deira.

Since the 19th century, following Jacob Grimm, Menglǫð has been identified with the goddess Freyja in most scholarship. In his children's book Our Fathers' Godsaga, the Swedish scholar Viktor Rydberg identifies Svipdagr with Freyja's husband Óðr/Óttar. His reasons for doing so are outlined in the first volume of his Undersökningar i germanisk mythologi (1882). Other scholars who have commented on these poems in detail include Hjalmar Falk (1893), B. Sijmons and Hugo Gering (1903), Olive Bray (1908), Henry Bellows (1923), Otto Höfler (1952), Lee M. Hollander (1962), Lotte Motz (1975), Einar Ólafur Sveinsson (1975), Carolyne Larrington (1999), and John McKinnell (2005). 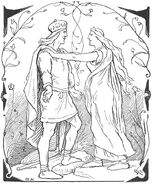 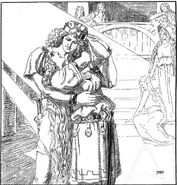 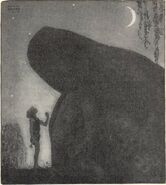 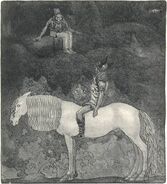 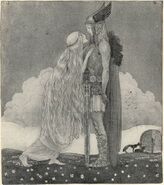 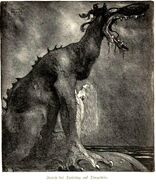 This page uses content from Wikipedia. The original article was at Svipdagr (view authors). As with Myths and Folklore Wiki, the text of Wikipedia is available under the Creative Commons Attribution-Share Alike License 3.0 (Unported).
Community content is available under CC-BY-SA unless otherwise noted.
Advertisement