Myths and Folklore Wiki
Register
Don't have an account?
Sign In
Advertisement
in: Gods, Japanese gods, Japanese mythology,
and 7 more

Susano-o or Susanowo (Japanese:スサノオ) is a god of the Storm and the Sea, and one of the most important dieties in Japanese mythology. He is also known for giving the gift of agriculture to humanity, and for being a more temperamental god.

Susano-o was born when the god Izanagi washed his nose. He is the brother of Amaterasu and Tsukuyomi who were born at the same time. He is said to be the father-in-law of Okuninushi.

Susanoo was known to have a rivalry with his sister Amaterasu. When he was saying his goodbyes after being exiled by Izanagi, Amaterasu demanded a con . Each took an object of the other's and birthed gods and goddesses. Amaterasu birthed three women from Susanoo's sword, while he birthed five men from her necklace. Claiming the gods were hers because they were born of her necklace, and the goddesses were his, she decided that she had won the challenge, as his item produced women. Frustrated at her insistence, Susanoo went on a rampage, destroying Amaterasu's rice fields, hurling a flayed pony at her loom, and killing one of her attendants in a fit of rage. Amaterasu, grieved and furious, hid inside a cave, while Susanoo left heaven.

A Legendary Sword and Reconciliation

After being thrown out of heaven, Susanoo descended to earth and found a sorrowful elderly couple who were about to sacrifice their eighth daughter to the monstrous serpent Yamato no Orochi by its demand. Susanoo immediately rushed to battle against the monster, but was beaten back. He returned to the couple with a plan, and first asked for their daughter's hand. They agreed to give Kushinada-hime to him as a bride, and the plan was put in action. Separating each of Orochi's 8 heads with a fence and baited with alcohol, each head of the monster soon passed out from drunkeness. Susanno then cut of each head and each tail to ensure the serpent would never revive. In one of the tails he found a sword, called Ame-no-Murakumo-no-Tsurugi ("Sword of the Gathering Clouds of Heaven").

Kakashi's Susanoo avatar made of chakra in Naruto 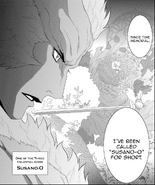 Susanoo in the BlazBlue franchise.