Sūn Wùkōng, in the West often called Monkey King or simply Monkey, is a main character in the Chinese novel Journey to the West. He is a prominent cultural and folkloric figure across Asia.

Wùkōng begins life as a rock on the Mountain Huaguo, which the winds shape into a monkey that becomes supernaturally animated. He soon becomes leader of a tribe of monkeys who take up safe residence in the Cave of the Water Curtain. Wùkōng reigns happily over the monkeys for many years until he finally begins to realize his own mortality. Seeking a way to become immortal, Wùkōng first trains under a Buddhist patriarch and masters many magic spells. When the Ten Judges of the Dead come to collect him, he fights back, managing to erase his name and all the monkeys’ names from the Book of Life and Death. Kings of Heaven report him to the Jade Emperor for this wrongdoings.

At the immortals' residence on Mount Pénglái, Wùkōng is appointed Keeper of the Heavenly Horses to keep him out of trouble. When he finds out what a low rank this really is, he rebels, appointing himself "Great Sage, Equal of Heaven". After a long fight, the gods are forced to recognize this title, and Wùkōng is appointed guardian of Xī Wáng Mǔ's heavenly peach garden. When he learns that the Bā Xiān have excluded him from an important banquet, he rebels again, stealing Xī Wáng Mǔ's peaches of immortality, Lao Tzu's pills of longevity, and the Jade Emperor’s royal wine, devouring them all. He then returns to the Cave of the Water Curtain, where the Army of Heaven attacks. Wùkōng defeats the entire army as well as Erlang Shen, heaven's greatest general.

Buddha finally traps Wùkōng in a mountain, under a seal with the mantra Om Mani Padme Hum. Here he remains until Guānyīn makes him Xuánzàng's disciple. He accompanies Xuánzàng on the journey to retrieve sutras from India, alternatively protecting his companions and causing mischief. Wùkōng ultimately achieves enlightenment and becomes a Buddha, finally getting his long-desired immortality. 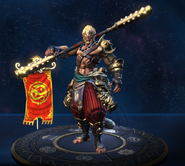 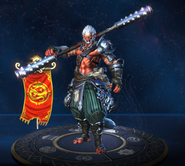 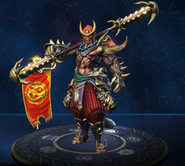 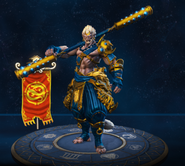 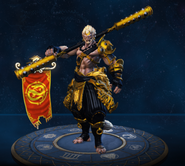 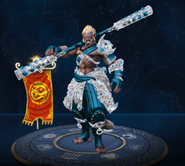 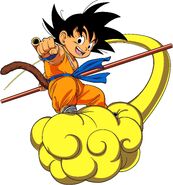 Son Goku (in the first Dragon Ball) by Akira Toriyama 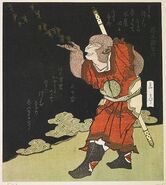 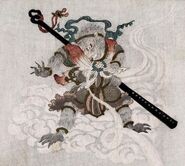 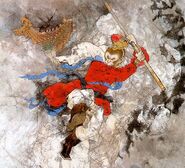 Mori Jin as the Monkey King