Stolas, also known as Stolos, is a Great Prince of Hell. He is seen as a fallen angel and commands 26 legions of demons. He is depicted as either being a crowned owl with long legs, a raven, or a man.

He teaches astronomy, history, and the knowledge of poisonous plants, herbs and precious stones.

Stolas in Christian and Occult Demonologies

Throughout history multiple formalized classifications of demons have been proposed. None of them however are considered canon by modern mainstream Christian denominations. Instead, lists of formalized demonologies tend to remain popular in occult traditions.

Stolas in the Pseudomonarchia Daemonum

"Stolas is a great prince, appearing in the forme of a nightraven, before the exorcist, he taketh the image and shape of a man, and teacheth astronomie, absolutelie understanding the vertues of herbes and pretious stones; there are under him twentie six legions."[1]

The Lemegeton Clavicula Salomonis or Lesser Key of Solomon is an anonymously written book of demonology that is believed to have been complied sometime during the 17th century CE. The work is divided into five books, the first of which, known as the Ars Goetia, lists seventy-two demons. The Ars Goetia is heavily based off of Johann Weyer's Pseudomonarchia daemonum. The Ars Goetia's passage on Stolas is as follows:

"The Thirty-sixth Spirit is Stolas, or Stolos. He is a Great and Powerful Prince, appearing in the Shape of a Mighty Raven at first before the Exorcist; but after he taketh the image of a Man. He teacheth the Art of Astronomy, and the Virtues of Herbs and Precious Stones. He governeth 26 Legions of Spirits; and his Seal is this, which is, etc."[2]

A depiction of Stolas from Shin Megami Tensei: Devil Summoner.

A depiction of Stolas from the animated web series "Helluva Boss," created by Vivienne Maree Medrano 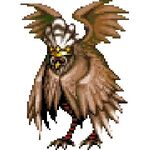 A depiction of Stolas in Castlevania Dawn of Sorrow.