The Sphinx (Greek: Σφιγξ) is a mythological figure from Greek mythology and Egyptian sculptures.

It has it's origins in sculpted figures of Old Kingdom Egypt, to which the ancient greeks applied their own name for a female monster, the "strangler", an archaic figure of Greek mythology. Similar creatures appear throughout South and South-East Asia, and the sphinx enjoyed a major revival in European decorative art from the Renaissance onwards.

The Sphinx was the emblem of the ancient city-state of Chios, and appeared on seals and the obverse side of coins from the sixth century BC until the third century AD.

She is said to have guarded the entrance to a certain area, often the Greek city of Thebes, and to have asked a riddle of travelers to obtain passage. The exact riddle asked by the Sphinx was not specified by early tellers of the stories about the Sphinx, and was not standardized as the one given below until late in Greek history. It was said in late lore that Hera or Ares sent the Sphinx from her Ethiopian homeland (the Greeks always remembered the foreign origin of the Sphinx) to Thebes in Greece where, in the writings of Sophocles, Oedipus Tyrannus, she asks all passersby history's most famous riddle:

"Which creature in the morning goes on four feet, at noon on two, and in the evening upon three?"

She strangled and devoured anyone unable to answer. Oedipus solved the riddle, answering, "Man — who crawls on all fours as a baby, then walks on two feet as an adult, and walks with a cane in old age." Bested at last, the tale continues, the Sphinx then threw herself from her high rock and died. An alternative version tells that she devoured herself. Thus Oedipus can be recognized as a liminal or "threshold" figure, helping effect the transition between the old religious practices, represented by the death of the Sphinx, and the rise of the new, Olympian deities.

The sphinx is generally depicted as a winged lion with a woman's face or head. Occasionally she was instead a woman with the paws, claws and breasts of a lion, a serpent's tail and eagle wings. She was represented in vase-painting and bas-reliefs most often seated upright rather than recumbent.

From the Bronze Age the Hellenes had trade and cultural contacts with Egypt. Before the time that Alexander the Great occupied Egypt their name, sphinx, was already applied to these statues. The historians and geographers of Greece wrote extensively about the Egyptian culture and their writings were circulated widely with Greek and Roman culture.

They sometimes called the ram-headed sphinxes, criosphinxes and the bird-headed ones, hierocosphinxes. The word "Sphinx" comes from the Greek Σφιγξ — Sphingx, apparently from the verb σφιγγω — sphinggo, meaning "to strangle" (note that the γ takes on a 'ng' sound in front of both γ and ξ). This may be a name derived from the fact that the hunters for a pride are the lionesses and they kill their prey by strangulation, biting the throat of prey and holding them down until they die. The word "sphincter" derives from the same root. 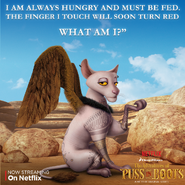 The Sphinx in the animated netflix series starring Puss in Boots

Sphinx from Gods of Egypt 2016

The Sphinx in TV series Star vs the Forces of Evil

The Sphinx in TV series Sofia the First

Sphinx from Class of the Titans

Sphinx from Voyage of the Unicorn (TV Movie 2001) 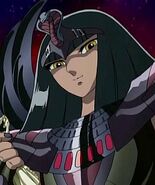 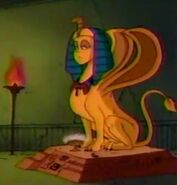 The Sphinx in Assassin's Creed: Odyssey 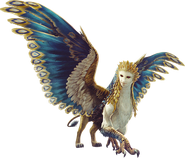 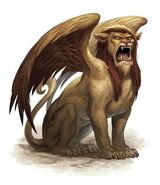 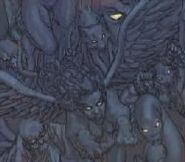 A Sphinx on the cover of X-Factor comic #221
Sphinx by Genzoman.jpg 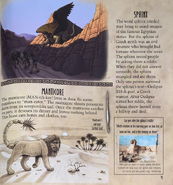 Add a photo to this gallery
Retrieved from "https://mythus.fandom.com/wiki/Sphinx?oldid=135259"
Community content is available under CC-BY-SA unless otherwise noted.