In Norse mythology, the Sons of Ívaldi (Old Norse: Ívaldasynir) are a group of dwarves who fashion Skíðblaðnir, the ship of Freyr, and the Gungnir, the spear of Óðinn, as well as golden hair for Sif to replace what Loki had cut off.

According to Skáldskaparmál, after these objects were created Loki made a bet with a dwarf, Brokkr, that his brother Eitri (or Sindri) would not be able to craft items to match the quality of those displayed by the sons of Ívaldi. This contest resulted in the creation of the boar of Freyr (Gullinbursti), the ring of Óðinn (Draupnir) and the hammer of Þórr (Mjöllnir), which were judged by the gods to be even more wondrous than the others. Thus, Brokkr had won the bet.

The account of this tale given in Skáldskaparmál does not reveal the names of Ívaldi's sons, nor how many there were, and they remain conspicuously absent after their initial mention in the stanza. The passing mention made of them in Grímnismál 43, the creators of Skíðblaðnir, "the best of ships", likewise sheds no additional light. Thus, their identities are a matter of scholarly speculation.

In the eddic poem Hrafnagaldur Óðins, stanza 6, Iðunn is identified as an "elf" (alfar) and the "youngest of the elder children of Ívaldi." This implies that Ívaldi had two sets of children, probably by different mothers. Thus Iðunn is a sister of the famous smiths, the Sons of Ívaldi.

In the Old Norse sources, the giant Þjazi is said to be the son of Alvaldi [Harbardsljód 19] and Öl-valdi [Skaldskaparmal 42]. I-valdi may be another form of the name. Þjazi is said to have two brothers, Iði and Gangr, or Iði and Egill. Thus, Gang is another name for Egill. Egill is also found as a companion of Þórr and keeps his goats safe when he ventures into the land of the giants. 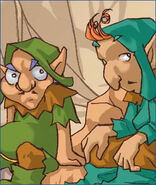 This page uses content from Wikipedia. The original article was at Sons of Ivaldi (view authors). As with Myths and Folklore Wiki, the text of Wikipedia is available under the Creative Commons Attribution-Share Alike License 3.0 (Unported).
Community content is available under CC-BY-SA unless otherwise noted.
Advertisement