Myths and Folklore Wiki
Register
Don't have an account?
Sign In
Advertisement
in: Stubs, Gods, Egyptian gods,
and 10 more

This article about Sobek is a stub. You can help Myths and Folklore Wiki by expanding it.

Sobek was a widely worshipped Ancient Egyptian deity, the God of the Nile River, water, warfare, strategy, military prowess, protection, pharaonic power, fertility and crocodiles. He was mainly worshipped in his major cult centre, Crocodilopolis. He is often shown as the son of Set, the god of chaos and Neit, goddess of hunting. The Egyptians worshipped him to protect them when they went on boats in the water. The temples in Crocodilopolis often had pools with crocodiles whom they treated with respect and care. He was also sometimes a creation deity, in which he emerged from Nun, the Sea of Chaos, and created Ben Ben, the first piece of land. In this form, he was often seen as an epithet of Ra, the deity of the sun.

Sobek's sacred animals were most reptiles, such as crocodiles, snakes and turtles. He wears a uraeus, a crown with a serpent, the symbol of his royalty over crocodiles. In his form of Ra (Sobek-Ra), he wears Ra's Sun Disc, Aten, and is accompanied by a gryphon. 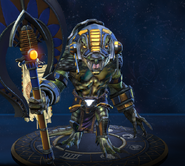 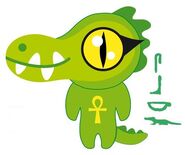