Roman mythology is the body of traditional stories pertaining to ancient Rome's legendary origins and religious system, as represented in the literature and visual arts of the Romans. "Roman mythology" may also refer to the modern study of these representations, and to the subject matter as represented in the literature and art of other cultures in any period.

The Romans usually treated their traditional narratives as historical, even when these have miraculous or supernatural elements. The stories are often concerned with politics and morality, and how an individual's personal integrity relates to his or her responsibility to the community or Roman state. Heroism is an important theme. When the stories illuminate Roman religious practices, they are more concerned with ritual, augury, and institutions than with theology or cosmogony.

The study of Roman religion and myth is complicated by the early influence of Greek religion on the Italian peninsula during Rome's protohistory, and by the later artistic imitation of Greek literary models by Roman authors. In matters of theology, the Romans were curiously eager to identify their own gods with those of the Greeks (interpretatio graeca), and to reinterpret stories about Greek deities under the names of their Roman counterparts. Rome's early myths and legends also have a dynamic relationship with Etruscan religion, less documented than that of the Greeks.

While Roman mythology may lack a body of divine narratives as extensive as that found in Greek literature, Romulus and Remus suckling the she-wolf is as famous as any image from Greek mythology except for the Trojan Horse. Because Latin literature was more widely known in Europe throughout the Middle Ages and into the Renaissance, the interpretations of Greek myths by the Romans often had a greater influence on narrative and pictorial representations of "classical mythology" than Greek sources. In particular, the versions of Greek myths in Ovid's Metamorphoses, written during the reign of Augustus, came to be regarded as canonical.

The Roman pantheon organization ranges from primordial deities like Terra to guardian gods like the Lares. Jupiter was the king of the Roman gods.

The Twelve Olympians of Roman mythology:

Roman mythology is known for adopting deities from other mythologies, mainly Greek mythology.

By the end of the Roman empire, Christianity was the official religion for the Romans.

In ancient Roman myth and religion, priests like the Arval Brethren use to make sacrifices on an annual basis to the Lares and the rest of Roman deities to guarantee good harvests and the health of the Emperor. 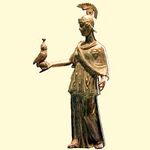 This page uses content from Wikipedia. The original article was at Roman mythology (view authors). As with Myths and Folklore Wiki, the text of Wikipedia is available under the Creative Commons Attribution-Share Alike License 3.0 (Unported).