Myths and Folklore Wiki
Register
Don't have an account?
Sign In
Advertisement
in: Perkwunos, Gods, Gods of Sky and Weather,
and 4 more

God of the Sky, Thunder, Justice, Storms and Physical realm

Perun is a Slavic God of sky, thunder, war, fertility and rain. Svarog was also considered as God of sky, however, Perun ruled over physical, atmospheric realm, while Svarog ruled over Prav - Realm of Gods and spirits of dead.

He is represented as muscular, bearded warrior with a mastery of axes he rode burning chariot pulled by fiery-mane horses who breathed fire and sounds of thunder were actually sounds of His chariots.

Perun was tied to justice and order. He could punish evil people by closing the gates of Iriy (place in realm of Prav dedicated to virtuous people), or by striking them down with lightning bolts. The oak tree and ''perunika'' (iris germanica) flower were also his symbol.

As the God who had the strongest cult, next to Dažbog and Svarog, Perun was considered the most powerful God in Slavic folklore. Historians, not even today know if he was chief God of all Slavs. Because of his role of bringer of thunder and rain, all Slavs, no matter of tribe, paid him a tribute in form of food or ''dodole dancing'' to battle the drought, especially during Summer season.

Perun was said to have been born from the Mother Sva (or the goddess Lada) and Svarog, after she consumed a Pike fish containing an embodiment of Rod, the creator god. This is detailed in the Book of Kolyady:

“The sky rings with thunder,

Then the clouds shined with lightning

And he appeared into existence, as if by lightning

The son of Svarog, Perun the Thunderer!”

Shortly after this event, a serpent known as the Skiper-Serpent crawled from the underworld and stole the baby Perun and his sisters. The sisters we kept separate from Perun, who was kept in a dungeon somewhere in the underworld, where he remained for 300 years. Mother Sva began to search for her son, and Veles, Hors, and Stribog transform into half-human, half-bird beings such as the alkonost to help. They all confront the Skiper-Serpent to find him, causing the serpent to lie. The lies run thin and after they command him a second time, he cracks and reveals Perun's location.

They find him in his dungeon, and though not dead, was deathly asleep, and needed the waters of life to be awoken. Mother Sva eventually acquires the waters from a Gamayun and succeeds in awaking Perun, who arises and exclaims “I shall go to the Skiper-Beast and return this act of friendship!”, thus beginning the first battle of Perun.

In order to enter the domain of the dark kingdom where the serpent was, Perun had to face several challenges. The first was a giant forest, with roots grown in an impossible maze. Perun threatened to turn the forest to splinters, and all of the roots parted way so he could continue. Next was a river, where the bed was made of the hardest stone, and the waves fiercer than any ocean. Perun cared not, and ordered the river to part. Next there were giant hills, which were no less foolish than the river and the roots, so they parted when Perun commanded.

Finally a giant bird sat upon twelve branches, said to have the roar of an animal yet the his of a serpent, able to take down entire forests in short blows. Once again, Perun cared not and took out his bow and arrows and quickly killed the creature and continued on. After this, however, Perun found his sisters transformed into hideous pale beasts, and a giant snake came from above and engulfed Perun in flame. With his might, he withstood the snake's flame and chopped it down with his axe. He then told his sisters to bathe in the Riphean mountain's river, so they may transform back to their godly forms.

At last, Perun comes into the home of the Skiper-Serpent, the halls of which were lined with bones in a gruesome fence. Not knowing who has entered his home, the serpent says “I am the ruler of the underworld! As soon as I reach the heavenly trunk, I shall bring the heavens to the ground!”. Saying nothing, Perun engaged in battle with the serpent, a battle which took many days to complete, and every weapon in Perun's vast arsenal. Surprised, the Skiper-Serpent asks him, “What is this? Are you a Vityaz or a heavenly god? My death will only come at the hands of Perun of Svarog, but he is far underground.” to which Perun replies “I am the death of which you speak of!” Perun then lifts the serpent and throws it to the ground where the earth-mother parts the land, swallowing the Skiper whole and thus creating the Caucasus mountains. After this, Perun ascends to Parv and claims his place as king of the gods and marries his wife-Diva-Dodola, daughter of Diviya, goddess of the moon.

Battle between Perun and Veles

Perun's main weapon was an axe, decorated with thunder marks, and golden apples. Whenever Perun tossed a golden apple into the air, they would transform into thunder and lightning. He used both against Veles - His arch-enemy.

There is story that Veles, in form of a horned serpent would slither his way to top of World Tree, causing Yav - human world to run dry. However, Perun would battle him with his axe and eventually kill the serpent, throwing him down to the ground and announcing victory by bringing rain and thunder. But Veles never dies and the cycle of battle, death and rebirth is repeating every time before rain happens.

In other versions, Veles steals Perun's wife, cattle, or his son, Yarilo, god of spring, and that is cited as the reason for their annual fight.

Though Perun and Veles are pretty much neutral in mentality, their battle is still considered as battle between order and chaos.

During Christianization of Slavs, there was religious phenomenon called ''dvoverje'' (having two faiths at same time). Slavs didn't want to abandon their Gods so easily. However, what Christian priests discovered is that days of celebration of their Gods is close to days of Christian Saints. And so people exchanged Perun with St. Elijah (who was also celebrated at 20th of July). St. Elijah among Southern Slavs was also called The Thunderer and got exactly same role as Perun - causing thunder and rain and riding burning chariots across the sky. 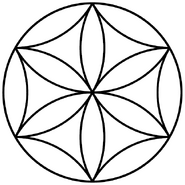 Another Thunder mark, seen on pottery and on stones used in building Orthodox Christian churches. 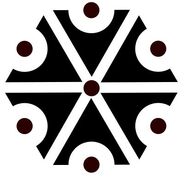 One of two known Thunder marks used by Perun and Slavs to protect their homes from thunder.

Perun (on top) versus Veles (down)
Community content is available under CC-BY-SA unless otherwise noted.
Advertisement