Queen of the Underworld

In Greek mythology, Persephone (Ancient Greek: Περσεφόνη (Persephónē), also called Kore, (Ancient Greek: Κόρη), meaning "The Maiden"), is the daughter of Zeus and the harvest goddess Demeter. She is the Greek Goddess of Spring Growth, and is the queen of the underworld.

While in the Underworld, she is a formidable queen fit for being a ruler of the dead. In some myths, she helps Hades out when it comes to dealing punishments and judgments.

The Greek horae of Growth Auxesia is also sometimes thought to be one of her titles.

Persephone as a vegetation goddess and her mother Demeter were the central figures of the Eleusinian mysteries that predated the Olympian pantheon and promised the initiated a more enjoyable prospect after death.

The origins of her cult are uncertain, but it was based on very old agrarian cults of agricultural communities.

Persephone was commonly worshipped along with Demeter and with the same mysteries. To her alone were dedicated the mysteries celebrated at Athens in the month of Anthesterion. In Classical Greek art, Persephone is invariably portrayed robed, often carrying a sheaf of grain. She may appear as a mystical divinity with a scepter and a little box, but she was mostly represented in the process of being carried off by Hades.

In the oral tellings of the story, rather than the Orphic written sources, the Chthonic gods Zagreus and Melinoe are said to have been conceived by Hades and Persephone when they mated in the form of snakes.[1]

Abduction into the Underworld

Persephone was married to Hades, the god-king of the underworld. Homer describes her as the formidable, venerable majestic princess of the underworld, who carries into effect the curses of men upon the souls of the dead.

There are many versions of the myth of Persephone's abduction, but most of them follow the same structure.

Persephone, or Kore as she was called at the time, was picking flowers in a field with her maidens when she decided to wander a bit farther off. She kept wandering until she was no longer in sight of her maidens but she did not notice and did not worry. Just as she was about to pick a very beautiful flower, the ground split open and Hades riding a dark chariot pulled by shadowy horses comes flying out. He grabs her and pulls her into the carriage with him. They then descend back through the crack, which disappears behind them, into the Underworld.

When Kore's maidens arrive to her mother, Demeter, with the news that Kore had run off, Hades is already long gone. Demeter is distraught, since she loves her daughter very much and is quite over protective. They all search for her but she is nowhere to be found, and that crack no longer exists.

Demeter goes to Zeus to beg him to see where her daughter is. But Zeus, who helped orchestrate the abduction, would not say anything. The mortal world following along with Demeter's despair began to crumble. Crops stopped growing, live stock were dying, and a drought plagued the land. Seeing all of this, Hecate went to Demeter and proposed they ask Helios what happened to Kore since he can see everything from his sun chariot. He tells them that she had been taken to the Underworld by Hades. Demeter is outraged and goes to Zeus to demand her freedom. Zeus sends Hermes, the messenger god, to the Underworld.

When someone eats food in the Underworld, they are bound to the place and unable to leave. Now, whether by choice or by force, Persephone ate half of a pomegranate and therefore became bound to the Underworld. Demeter, as could be guessed, was furious and demanded her daughter being given back to her at once. While Zeus could not go against the rules of the Underworld, he worked something out. 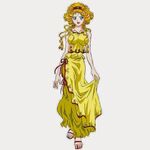