Pele (pronounced peɪleɪ, pay-lay or pel-lə) is the Hawaiian goddess of fire, lightning, wind, and volcanoes as well as the creator of the Hawaiian islands. Pele also carries a staff, which she uses to know if the ground is dry.

There are a number of variations in the legends that tell of how Pele first came to the Hawaiian islands. One of the most common tells that she was one of a family of six daughters and seven sons born to Haumea (a very ancient Earth goddess) and Moemoe (a name having to do with purposeful dreaming). She lived in Kahiki and longed to travel, so she borrowed a canoe from a brother and came from the northwest with some of her siblings, landing first at Lehua, a small volcanic cone sticking up out of the water just north of Niihau. Another variation says she was chased from her homeland by her angry sister, Namakaokahai, an ocean goddess. Pele's essence is fire and she dug into the island to find a firepit to live in, but was unsuccessful and went on to western Kauai. Traveling along the Na Pali to the north shore she dug again but only found water (at the Wet Caves) and journeyed inland to the very ancient peak now called "Puu ka Pele" (Pele's Hill). Still having no luck she followed the Waimea Canyon to the south side, dug around Poipu for awhile, then went on to Oahu, Molokai, Maui and finally Hawaii where she found a place for her family to live at last in Kilauea.

Pele was considered to be a rival of the Hawaiian goddess of snow, Poliʻahu, and her sisters Lilinoe (a goddess of fine rain), Waiau (goddess of Lake Waiau), and Kahoupokane (a kapa-maker whose kapa-making activities create thunder, rain, and lightning). All reside on Mauna Kea, except Kahoupokane who lives on Hualalai.

One myth tells that Poliʻahu had come from Mauna Kea with her friends to attend sled races down the grassy hills south of Hamakua. Pele came disguised as a beautiful stranger and was greeted by Poliʻahu. However, Pele became jealously enraged at the goddess of Mauna Kea. She opened the subterranean caverns of Mauna Kea and threw fire from them towards Poliʻahu, with the snow goddess fleeing towards the summit. Poliʻahu was finally able to grab her now-burning snow mantle and throw it over the mountain. Earthquakes shook the island as the snow mantle unfolded until it reached the fire fountains, chilling and hardening the lava. The rivers of lava were driven back to Mauna Loa and Kīlauea. Later battles also led to the defeat of Pele and confirmed the supremacy of the snow goddesses in the northern portion of the island and of Pele in the southern portion. 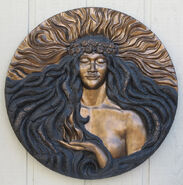 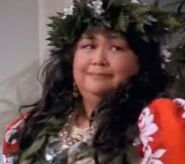 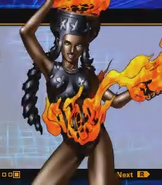 Pele in Shin Megami Tensei IV
Add a photo to this gallery
Retrieved from "https://mythus.fandom.com/wiki/Pele?oldid=128563"
Community content is available under CC-BY-SA unless otherwise noted.