Nuwa is the Chinese mother goddess. She is married to Fuxi, the god of emperors. Nuwa is known as the creator of human - kind and the deity who had been the one to repair the Pillars of Heaven. She is one of the major goddesses of Chinese mythology due to being the creator of nature and also other creatures besides humans.

Nuwa is often portrayed in traditional Chinese clothing from the Tang Dynasty. Most of the adaptions of the original mythology depict her as a koimaid or a creature similar to that of a mermaid due to her creating the first humans using clay from a riverbank.

On a lonely normal day in the heavens, a deity, Nuwa, was tired of having nobody to talk to except for some of the gods and goddesses. When she was walking to a riverbank to try to make herself not bored anymore, she suddenly had an idea when she saw the clay on the bank of the river. Nuwa had decided that she could scope creatures that had resembled the gods and goddesses in order to try to cure her loneliness. After she scoped the creatures, she had brought them to live so that she could interact with them, eventually known as "humans". With great excitement, Nuwa had brought a rope, and flung it around over her head creating messier and a little more deformed version of the figurines she had made by hand. The figures that she made by hand became the nobles and wealthy people who had served the emperor, while the messier and deformed ones had been the farmers and regular workers. 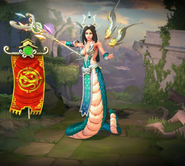 A Chinese traditional painting of Nuwa

Nuwa creating the first people out of clay