Myths and Folklore Wiki
Register
Don't have an account?
Sign In
Advertisement
in: Celtic mythology, Scottish mythology, Equids,
and 2 more

The Nuckelavee or Nuckalavee (supposedly meaning "Devil of the Sea") is a creature from Orcadian folklore. The name is a later corruption of the Orcadian name "knoggelvi", which in turn seems to be a variant of the "Nokk" or "Nuggle", and is thus related to the Icelandic Nykur.

The nuckelavee is the most malevolent of the demons in and around the Scottish islands, without any redeeming characteristics. In summer months, it was restrained in the depths of the ocean by the deity known as The Mither O'the Sea.

A unique and solitary creature possessing extensive evil powers, it can influence events throughout the islands. The nuckelavee's breath was toxic, and could wither crops, cause a drought, and cause disease and plague in livestock and humans.

The Nukelavee hates the smell of burning seaweed to create kelp. This will enrage the Nukelavee, sending it into a fit of rage. Once enraged, he would kill fields of cattle, and only the only person that can stop him is The Mither O'the Sea.

Nuckelavees are strongly built and stand nearly 6 feet tall at their horse head and about 9 feet at their humanoid head, with a weight of nearly 2,000 pounds. He resembles a horse whose legs are part fin like a fish, and a single giant eye, which burns with a red flame. A human with a large head is merged along the back of the horse body like a strange centaur. The most gruesome detail of his appearance is the fact that he has no skin. Black blood courses through yellow veins, and the pale sinews and powerful muscles are visible as a pulsating mass. Some reports claim that he is simply a very large head on two small arms, with all of the other characteristics mentioned above.

The Nuckelavee has an aversion to fresh water, and those who are chased by him have only to cross a stream to be rid of him. It also will not come ashore when it is raining. 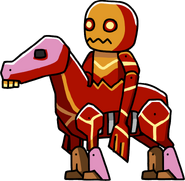 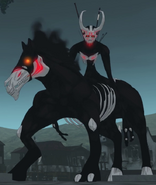 Nuckelavee as a Grimm, seen in RWBY Volume 4
Community content is available under CC-BY-SA unless otherwise noted.
Advertisement