Myths and Folklore Wiki
Register
Don't have an account?
Sign In
Advertisement
in: Fairies, Western goblins, Danish folklore,
and 4 more

The Nisse (also known as a Tomte) is a mythological creature from Scandinavian folklore typically associated with the winter solstice and the Christmas season.

According to tradition, they secretly live in a house and act as its guardian. If treated well, they protect children and animals from evil and misfortune, and they also help with chores and farm work. Despite their size, the tomte/nisse possess an immense strength.

The tomte is connected to farm animals in general, but his most treasured animal was the horse. Belief had it that one could see which horse was the tomte's favourite as it would be especially healthy and well taken care of. Sometimes the tomte would even braid its hair and tail. Sometimes actually undoing these braids could mean misfortune or angering the tomte.

If anyone spilled something on the floor in the house it was wise to shout a warning to the tomte below. One was also required to please the spirit with gifts (see Blót) – a particular gift was a bowl of porridge on Christmas Eve. If the tomte was not given his payment, he would leave the farm or house, or engage in mischief such as tying the cows' tails together in the barn, turning objects upside-down, and breaking things (like a troll).

The tomte/nisse was often imagined as a small, elderly man (size varies from a few inches to about half the height of an adult man), often with a full beard; dressed in the everyday clothing of a farmer. Generally no taller than three feet, and having a long white beard and wearing colorful clothes.

However, there are also folktales in which he is believed to be a shapeshifter able to take a shape far larger than an adult man, and other tales where the tomte/nisse is believed to have a single, cyclopean eye.

In modern Denmark, nisses are often seen as beardless, wearing grey and red woolens with a red cap. Since nisses are thought to be skilled in illusions and sometimes able to make themselves invisible, one was unlikely to get more than brief glimpses of him no matter what he looked like. Norwegian folklore states that he has four fingers, and sometimes with pointed ears and eyes glowing in the dark.

However, they are known to have a temper, especially when they are offended. If they are ever insulted, they usually play tricks and can kill livestock.

Even though they are protective and caring, they can be easily offended, and retributions range from small pranks like a stout box on the ears to a more sociopathical punishment like killing off the livestock or ruining of the farm's fortune.

The tomte/nisse was a traditionalist who did not like changes in the way things were done at the farm.

Another easy way to offend him was rudeness. Farm workers swearing, urinating in the barns, or not treating the creatures well would be soundly thrashed.

There are a few popular myths about the Nisse and their love of porridge.

One myth goes as follows: The tomte liked his porridge with a pat of butter on the top. In an often retold story, a farmer put the butter underneath the porridge. When the tomte of his farmstead found that the butter was missing, he was filled with rage and killed the cow resting in the barn. But, as he thus became hungry, he went back to his porridge and ate it, and so found the butter at the bottom of the bowl. Full of grief, he then hurried to search the lands to find another farmer with an identical cow, and replaced the former with the latter.

Another tale is when a Norwegian maid decided to eat the porridge herself, and ended up severely beaten by the nisse. The being swore: "Have you eaten the porridge for the tomte, you have to dance with him!" The farmer found her nearly lifeless the morning after.

The Tomte was preceded by another mythological creature: the Yule Goat. Based on tradition, these Yule Goats appear on Christmas Eve. Fathers dressed up as this figure and knocked on the door of their homes to hand out presents to their children. The Yule Goat was soon replaced by the Tomte, or the Nisse. In this case the Nisse is known as a gift bearer and is considered the Swedish, Danish and Norwegian version of Father Christmas. 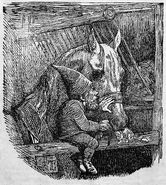