Myths and Folklore Wiki
Register
Don't have an account?
Sign In
Advertisement
in: Slavic mythology, Goddesses of Magic, Goddesses of Death,
and 5 more

Goddess of Winter and Death

Morena or Marena (in Czech, Slovak, Russian) or also Mara, Maržena, Morana, Moréna, Mora or Marmora is a Slavic goddess associated with seasonal agrarian rites based on the idea of death and rebirth of nature. She is associated with death and winter and often described as the goddess of death. Marzanna can be compared to the Greek Goddess Hecate or the Roman Goddess Ceres.

As Goddess of death, her realm was Nav - realm of dead and she wasn't respected as much as her counterpart and enemy Vesna. She represented long, cold winters that could bring death of both humans and their cattle in form of starvation and freezing. Her arrival was always expected with fear, while arrival of Spring season was always celebrated.

Among Eastern Slavs, there was belief that Yarilo, when he was taken by Veles, he met Morana at the beginning of Spring and their love brought wheat and fruits. However, when Yarilo stopped liking her, she murdered him and that caused Autumn and eventually Winter to happen. After Yarilo lost his love for Morana, she began to love Chernobog. They gave birth to Triglav, The Three Headed God of War.

Another story says that Stribog's grandchildren (the winds), bring Marzanna to the Slavic realm of Yav at the end of each year, and Vesna at the beginning of March.

She was imagined either as black-haired, pale woman with fangs and claws, or similar to Baba Yaga - as an ugly, old witch.

In Czech Republic, Slovakia, Russia and Poland, there is still an custom of banishing Morana that is happening around 21 March. People would create an effigy from straw or scrap cloth, then they would beat it until dismemberment, drown it in nearby river or burn it. In Russia, that custom is called Maslenitsa. 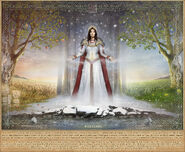