Myths and Folklore Wiki
Register
Don't have an account?
Sign In
Advertisement
in: European dragons, Creatures from Heraldry, Norse creatures,
and 3 more

One of the most famous lindworms was the dwarf Fáfnir who was turned into a draconic lindworm from the Poetic Edda.

Níðhöggr, along with other lindworms, gnaw on the roots of Yggdrasil, the World Tree in Norse Mythology.

A lindworm's appearance varies across countries and the stories in which they appear. The most common depiction of lindworm is a creature with a serpentine body, a dragon-like head, scaled or reptilian skin and two clawed arms in the upper body. Some depictions have wings, while others do not.

In Scandinavian folklore, a childless queen asked an old crone (most likely a witch) how she could bear children. The old woman tells her to eat two onions, however, the queen forgot to peel the first onion. When she bore twins, although the second son was perfect, the first son was instead born as a lindworm.

As they grow older, the lindworm prince insists that his younger brother cannot marry until he himself finds a bride. As such, many chosen maidens are brought before the lindworm. As each girl is displeased by him, he eats them all.

One day, a shepherd's daughter is to be brought before the lindworm prince as a bride candidate. She talks to the same old crone as before, who gives her instructions. Following the crone's advice, the girl presents herself to the prince wearing every dress she owns.

The lindworm tells her to take off her dresses, but she insists he shed a skin for each dress she removes. Eventually his human form is revealed beneath the last skin. Some versions of the story omit the lindworm's twin, and the gender of the soothsayer varies. 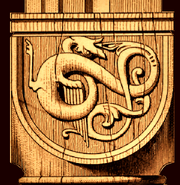 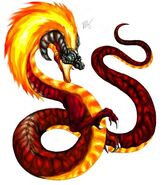