Myths and Folklore Wiki
Register
Don't have an account?
Sign In
Advertisement
in: Stubs, Creator gods, Water gods,
and 5 more

This article about Khnum is a stub. You can help Myths and Folklore Wiki by expanding it.

Khnum is one of the oldest gods in Egyptian mythology. His symbol is a flat-horned ram. He is a creator god and is believed to create the bodies of children using clay and a potter's wheel. He is the husband of Satet and father of Anqet and, with them, makes up the Elephantine triad. He is also a god of the Nile and protector of the first cataract. 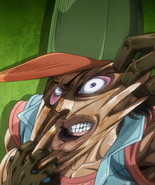 Khnum as the Stand of Oingo (Zenyatta) in Stardust Crusaders.

Card in the Ending Credit of JJBA.