Myths and Folklore Wiki
Register
Don't have an account?
Sign In
Advertisement
in: Philippine creatures, Giants, Nature spirits,
and 2 more

The kapre is a Philippine cryptid creature with the appearance of an phenomenally tall, long-legged, god type of hairy humanoid, that sits in big trees and smokes cigarettes. It is often seen waiting for people as they walk through a path. It scares away little children who play at night. If you're stuck in a place and you keep going around in circles, you're said to be played around by a kapre. To escape its control, you must remove your shirt/clothing, and wear it inside-out.

The term kapre comes from the Arabic word "kaffir", meaning a non-believer in Islam. The early Arabs and the Moors used it to refer to the non-Muslim Indians who were dark-skinned. The term "kaffir" was also used for Papuan slaves brought to the Philippines by the Portuguese before slavery was abolished by Spain.

Kapres are not necessarily considered to be evil, unlike the Manananggal. According to some experiences, the kapre have moved on from smoking nigh-endable cigars to drinking beer. Some kapre are rather wise, some rated brute like, but they all have one common thing, they have an odd desire of watching over farm animals and locals. Their demeanor is that of protection and knowing of it's care, but know this, if one were to make a kapre mad, then all hell breaks loose, as the kapre can go ahead and snap an ikugan's neck.

Kapres are also said to play pranks on people, frequently making travelers become disoriented and lose their way in the mountains or in the woods. They are also believed to have the ability to confuse people even in their own familiar surroundings; for instance, someone who forgets that they are in their own garden or home is said to have been tricked by a kapre.

Reports of experiencing kapre enchantment include that of witnessing rustling tree branches, even if the wind is not strong. Some more examples would be hearing loud laughter coming from an unseen being, witnessing lots of smoke from the top of a tree, seeing big fiery eyes during night time from a tree, as well as actually seeing a kapre walking in forested areas. It is also believed that abundant fireflies in woody areas are the embers from the kapre's lit ganja pipe.

Kapres may make contact with people to offer friendship, or if it is attracted to a woman. If a kapre befriends any human, especially because of love, the kapre will consistently follow its "love interest" throughout life. Also, if one is a friend of the kapre then that person has the ability to see it and if they were to sit on it then any other person could see it. This proves kapres are the "friendly type" of humanoid.

In some versions, the kapre is supposed to hold a magical white stone, smaller in size than a quail egg. Should any person happen to obtain this stone, the kapre could grant wishes.

Kapre is a filthy, gorilla-like dark giant humanoid characterized as a tree demon. It is described as being tall (between 7 to 9 ft), brown, hairy male with a beard. Kapres are normally described as smoking a very large ganja pipe, whose strong smell would almost always attract human attention. But a kapre's most least known, but probably most horrendous feature is the fact that it reeks of goat.

The kapre is said to wear the indigenous Northern Philippine loincloth known as bahag, and according to some, it wears a belt which gives the Kapre the ability to be invisible to humans.

Kapres are said to dwell in big trees like acacias, mangoes, bamboo and banyan (known in the Philippines as balete). It is also mostly seen sitting under those trees. 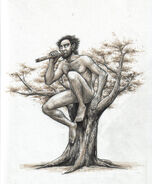 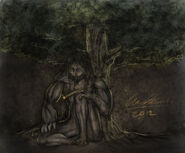