Myths and Folklore Wiki
Register
Don't have an account?
Sign In
Advertisement
in: Islamic mythology, Jinn, Arabian mythology,
and 7 more

In general, it is said that the Jinn are spirits of fire (and sometimes wind) and can take on any form they choose - animal or human - and can be of any size. it is said that some of their powers are the ability of manifestation and transformation. They have a human-like form and can take the shape of animals but only temporary unless it is as their tribe's animal protector.

For the ancient Semites, Jinn were spirits of vanished ancient peoples who acted during the night and disappeared with the first light of dawn. They could make themselves invisible or change shape into animals at will. These spirits were commonly believed to be responsible for diseases and for the manias of some lunatics.

they can be both good and evil creatures; the evil ones are said to lead humans astray.

Most of them are hostile, or at least not all that friendly to humans, although some can be friendly, and helpful. It is possible for magicians or wise men and women to gain power over a Jinn and use it to perform amazing and magical tasks. Be wary, for even a friendly Jinn is unpredictable and certainly anyone who breaks an agreement with a Jinn will strongly regret it. Often Jinn take naughty pleasure in punishing people for wronging them, even unintentionally.

In popular western culture, Genies are often seen as been concealed with old lamps, which when rubbed a Genie appears out of them. The reason given is that they have been trapped inside the lamp by an evil sorcerer. Traditionally, it is said that the great and wise King Solomon shut misbehaving Jinn in lead-stoppered bottles and threw them into the sea. This description comes from the western translation of "the Book of One Thousand and One Nights". When someone rubs the lamp three times the Jinni inside will appear and obey the one who set it free by granting three wishes.

However, in the original lore, Jinn are not found in brass lamps and do not grant wishes.

there are three different types of jinn:

In some books, such as ''Fairies in Folklore,'' jinns are considered a type of wish-granting fairy. This notion came to the English-speaking world by novels such as "A Thousand and One Arabian Nights." This concept is different from Islamic notions of jinn.

In Persian folklore there is divs/daevas are brutal and giant demons who similar to jinn which opposed by peris (fairy-like benevolent beings who also very similar to jinn.)

In Japanese folklore there is ikiryō also known as seirei are elemental spirits very similar to jinn.

In other Abrahamic religions Christian fallen angels and Jewish mazzikin/shedim are very comparable to jinn but they are also very different in the same time. (depends on myths because not all jinn are demons, even demonic jinn are live in their own realm and neither all of them evils nor living in the hell.) 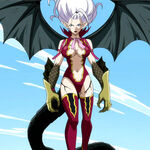 Mirajane in her majin transformation.