Myths and Folklore Wiki
Register
Don't have an account?
Sign In
in: Chinese mythology, Vampires, Creatures,
and 3 more

The Jiangshi (僵屍 or 殭屍) is a Chinese vampire/zombie that's name translates to 'stiff corpse'. It is a horrific creature that usually hops along, and when it comes across a victim it will suck the life force out of them. (In Chinese, qi.)

The Jiangshi has many different names, such as Chiang Shi, Kang Shi and Geungsi.

They are said to be created when a person's soul (魄 pò) fails to leave the deceased's body. However, some have disputed the comparison of jiang shi with vampires, as jiang shi are usually mindless creatures with no independent thought. One unusual feature of this monster is its greenish-white furry skin, perhaps derived from fungus or mold growing on corpses.

The Jiangshi is said to be raised by a necromancer, or when the soul of a dead man cannot leave his body due to reasons in life, such as they were a horrible troublemaker, or if they commit suicide. The body looks different due to when they were raised. If they are raised soon after death, their appearance looks almost like a normal human, however if they have decomposed some time before they come to life, they can look horrific and ghastly.

Usually they are described as a pale white colour with furry green hair, moss, or mold growing on their flesh. The Jiangshi also has pale, long white, messy hair atop their heads. They are said to have extremely long tongues and black, sharp fingernails, and they walk along with their arms outstretched.

The Qing Dynasty scholar Ji Xiaolan mentioned in his book Yuewei Caotang Biji (閱微草堂筆記) that the causes of a corpse being reanimated can be classified in either of two categories: a recently deceased person returning to life, or a corpse that has been buried for a long time but does not decompose. Some causes are described below:

The Jiangshi may be distracted if small objects are thrown about, in which case, like most vampires, it will stop to count them. Also, they are blind, and if one holds their breath when it passes, they may remain unnoticed.

Supposedly a 15 cm piece of wood nailed to the width of the bottom of the door will stop a Jiangshi from entering. 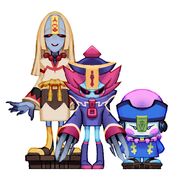 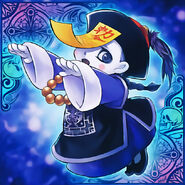 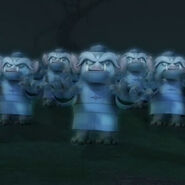 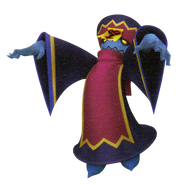 A Nightwalker from the game Kingdom Hearts, based on the Jiangshi.

Qiqi, a zombie from the game Genshin Impact, based on the Jiangshi.
Community content is available under CC-BY-SA unless otherwise noted.