Izanagi (Japanese:伊邪那岐 or 伊弉諾) is the male counterpart and older brother of Izanami and is a creation god in Japanese mythology. He and his wife were the first of the Kamiyonanayo (Seven Divine Generations) to procreate.

Also known as Izanagi-no-Mikoto, Izanagi-okami, or "He who Invites," he is one of the most important Japanese deities.

The very first of the gods, Kunitokotachi and Ame-no-Minakanushi, summoned forth 8 pairs of gods from the chaos. Of these Seven Divine Generations, the last pair was Izanagi and Izanami, and they were given the responsibility of forming the land. To do so, Izanagi was given a heavenly spear called Ame-no-Nuboko decorated in fine jewels. As the two stood on the bridge floating between earth and heaven known as Ame-no-Ukihashi, Izanagi stirred the primordial dark sea with his spear. Upon raising his spear, the salty drops formed the first island, soon followed by the rest of the land. The first island, known as Onogoroshima became the home of him and his wife.

From this island, they built a great palace named Yahiro-dono, supported by the new Pillar of Heaven where they had their marriage ceremony. However, because Izanami spoke first in the ceremony, their first two children were deformed.

They redid the marriage ceremony where they gave birth to many healthy gods representing aspects of nature (such as mountains and rivers), as well as the eight islands of Japan; Awaji, Iyo (later Shikoku), Ogi, Tsukushi (later Kyūshū), Iki, Tsushima, Sado, and Yamato (later Honshū).

However, when Izanami was burned to death while giving birth to the fire god, Kagutsuchi, Izanagi became enraged. Taking hold of his sword Ame-no-Ohabari, Izanagi cut the fire god into multiple pieces. With Izanami buried in Mt. Hiba and she herself in the underworld Yomi, Izanagi determined to travel there and retrieve his wife. She said she would ask the rulers of Yomi if they would let her go, but in his impatience, Izanagi lit a torch against her wishes. In horror, he saw his formerly beautiful wife as rotting bones and being eaten by maggots, and so immediately fled. In anger, she sent a mob of ugly female spirits, warriors, and eight thunder gods after him, though he managed to escape the underworld and block the entrance with a boulder. From the other side of the rock, Izanami cried that if he left her she would kill 1,000 people from the land every day, while he merely retorted that he would cause 1,500 more to be born each day. From this Izanagi became the god of the land of the living, while she became queen of the land of the dead, and their marriage was ended.

Cleansing himself with water from his interactions with the dead, three more deities were created by Izanagi as he washed his body. From his left eye came the Sun Goddess Amaterasu, from his right eye came the Moon God Tsukuyomi, and from his nose came the Storm God Susano-o. Pleased with these children, Izanagi split his domain between them.

Izanagi and Izanami had countless children (sometimes approximated at 800 all the way to 800 million gods), though their first child Hiruko was deformed and promptly abandoned in the sea. 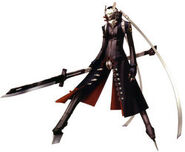 Izanagi from his appearance in Persona 4 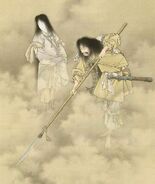