Iara or Uiara (from the tupi, y-îara, "lady of the waters") or Mother-of-water, according to Brazilian Mythology, is a beautiful mermaid that lives in the Amazon Rive. Her myth originated in the Amazon region, located in the north of the country.The fierce  ipupiara, the African Iemanjá, and the European mermaid converged to create this unique mythical being.

Some versions says she is blonde with green or blue eyes while others says she has black hair with green brands or completely green hair and brown eyes. While the legends do not agree on the color of their eyes and hair, both agree that Iara is of extraordinary beauty. Such difference depends on the Brazilian region. The blonde representation is due to the European influence while the one with brown hair is due to its indigenous origin.

There are many versions for the Iara myth, chroniclers of the 16th and 17th centuries recorded that in the beginning the character was male and was called Ipupiara , a fish-man who devoured fishermen and took them to the bottom of the river. In the 18th century, Ipupiara had become the seductive mermaid Uiara or Iara. Fishermen from all over Brazil, fresh or salt water, tell stories of young men who gave in to the charms of the beautiful Iara and ended up drowned in passion. She leaves her house on the bed of water late in the afternoon. It appears seductive to the margins of the waters: half woman, half fish, long hair adorned with red flowers. Sometimes she takes the human form and goes out in search of victims.

The indigenous people of the Amazon region tell that Iara was an excellent and courageous warrior. Her brothers were jealous of her, for her father praised her greatly. One day, the brothers decided to kill Iara. However, she heard the plan and decided to kill the brothers as a form of defense. After doing so, Iara fled into the woods. However, her father pursued her and managed to capture her. As punishment, Iara was thrown into the river Solimões (Amazon region). The fish that were there saved her and, as it was a full moon night, she was transformed into a beautiful mermaid. Another version say that her brothers managed to kill her and then dropped her body into the river. The moon goddess, Jaci , felling sorry for her, transformed Iara into a beautiful mermaid. Since then, Iara inhabits the Amazonian rivers conquering men and then taking them to the bottom of the river, which die drowned.

With the arrival of the Africans people at the time of slavery, as they were forbidden to practice their religion, they began to blend their beliefs with those of the Indians and with Christianity, and then, for some Afro-Brazilian religions, Iara is considered a goddess or is also considered the orixá responsible for waterfalls and rivers or even confused with Iemanjá.

The iara - or mother of water, as she is also known - is one of the most controversial myths of Brazilian folklore, mainly due to its origin. The Brazilian mermaid, in fact, would be a derivation of the Tupi myth of Ipupiara , a male aquatic monster that brutally attacked the natives. Câmara Cascudo, the greatest folklorist the country has ever known, was categorical: "No chronicler of colonial Brazil registers the Mother of Water as a mermaid, attracting by the corner or simply transformed into a woman. He is always Ipupiara, ferocious, hungry and brut. "

The "devil of the waters," as the natives had described the Ipupiara, "was fifteen feet long and sown with hair on the body, and on the muzzle there were very large bristles, like mustaches." The being was killed by a sharp thrust in the abdomen and then dragged well away from the water to dry.Other stories say the creature was known to kill its victims by a powerful hug, bursting men inside - like the constricting serpents. The corpses of those who suffered from Ipupiara's fury were found almost intact. The monster, after all, did not eat its victims. At most he devoured their eyes, noses, fingers, and sometimes the genital.

The transition from the monster Ipupiara to the sweet Iara that still inhabits the popular imagination, was due to the cultural hybridization. The fierce ipupiara , the African Iemanjá , and the European mermaid converged to create this unique mythical being, Iara.

The balance between these cultures, however, was slow to be found. As Cascudo points out, it is with the romantic reaction that the transfigurative Indianism of Gonçalves Dias began in the second half of the 19th century that the monster becomes a maiden. In fact, for many years, the Iara was literally described as a European mermaid, with fair hair and clear eyes. This is what we see in the poem by Olavo Bilac, who lived in the same period.

The Iara usually stays on the slopes of the rivers to attract the men with their beautiful and irresistible song, a voice that echoes by the waters and the forests. Men, when they hear it, are enchanted with their voice and follow it to the bottom of the rivers, from where they never return. Iara's power is so strong that it looking into the man's eyes is enough to make maddened with love. Iara, when she bewitches someone, invites them to come near her, and the men believe they will have an eternal love with a lovely woman. However, the Iara always has evil intentions: what she wants is to lure them to death.

The few who can escape their charms ends up going crazy, because of the enchantment that Iara throws at them. To get rid of evil, only the Pajé, the indigenous religious chief, can act, doing a ritual to escape the spell.

According to the legend, in some of its many versions, the Iara, when it is out of the margins and the water, turns into a beautiful woman. However, when in this form, she loses all her powers.

Jaraguari was an Indian from the tribe of Manaus that, like many, fell in love with Iara. He was strong, brave and cheerful as a bird. In the tribe he was loved and respected, for he treated everyone with affection and respect. One day, Jaraguari's mother noticed that her son was becoming different. He climbed the Negro River in his igara and only returned to the oca late at night, sad and lonely.

The mother looked at him anxiously. "Why do you come back so late? Beware of the dangers of the forest, my son... "

Jaraguari replied, "Mother, I saw a young woman of extraordinary beauty swimming among the flowers of the stream. She has golden hair and her song is more beautiful than that of the uirapuru ... "

The mother cried out in terror:" Iara! You were enchanted by Iara. If you do not run away from it, you will be taken to the bottom of the water!"

But Jaraguari did not listen to his mother's advice. Days later, the canoe in which he went out to fish appeared empty, floating in the waters of the Negro River.  It’s said that he was seen with the beautiful mermaid in his arms, and since then, considered dead. But Iara didn’t drown her lover, who now lives with her in her palace underwater. Since then, the Indians have stopped fishing at night. He was the first man that Iara really loved.

A beautiful woman, elusive and rare,

In a bubble of silver flakes, Iara

Of gold hair and cold body.

Between the dating and spying nymphs:

And she, from the mobile mirror of the clear wave,

With her green, damp eyes he stares at me,

And it offers me the soft and tender breast.

I vent, in the impetus of a husband,

In the desperation of the supreme glory,

To narrow it, mad with pride and joy ...

But in my arms the illusion vanishes:

And the mother of water, exuding a pious pain,

It melts into dead foam pearls. 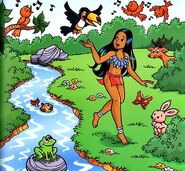