A huli jing (Chinese: 狐狸精; pinyin: húli jīng) is a fox spirit from Chinese mythology. Huli jing are akin to European fairies and can be either good or bad spirits. In modern Mandarin and Cantonese profanity, the term "huli jing" describes a woman who seduces married/romantically-involved men.

In Chinese mythology, these fox spirits are believed to be capable of obtaining a human form, magical powers, and immortality.

Most depictions of huli jings depict them as females who appear as young, beautiful women. These foxes are often seen as dangerous, however some stories depict them in love stories between a fox appearing as a beautiful girl and a young human male.

Huli jings are also used to explain the incidence of attacks in koro, a culture-bound syndrome found in southern China and Malaysia.

When a huli jing becomes 47 years old, they would have the ability to transform into beautiful women. After the age of 100 years, they will become a celestial deity. Huli jing are usually depicted as evil. 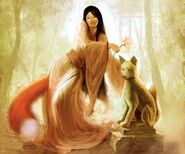