Myths and Folklore Wiki
Register
Don't have an account?
Sign In
Advertisement
in: Time and fate goddesses, Fortune goddesses, Goddesses of Nature,
and 6 more

Goddesses of the Hours and Seasons

The Horae/Horai (or "Hours") are the goddesses of the hours and seasons, and are found in Greek and Roman Mythology. They lead the Sun into the sky when he rides his Chariot. Their numbers vary depending on the source, but there are usually 12 for each hour of the day, and between 4 to 11 for the Seasons and times of harvest. Originally they were split into triads.

There are also 3 who are personifications of Justice, Peace, and Order who are similar to the Graces, but are still considered part of the Horae. These three were actually the most famous of the Horae, and were often worshipped by farmers for their jurisdiction over the stars.

They presided over the revolutions of the heavenly constellations by which the year was measured, while their three sisters, the Moirae (Moirae) spinned out the web of fate. The Horai also guarded the gates of Olympos and rallied the stars and constellations of heaven.

The Horai were particularly honoured by farmers who planted and tended their crops in time with the rising and setting of the stars—measures of the passing seasons. The association of agriculture with law and order can also be found in the divinities of Zeus, Demeter and the Daimones Khryseoi.

They are also considered to be friends of the Muses, and would often dance with them. They were also frequently seen as handmaidens to specific gods and goddesses. 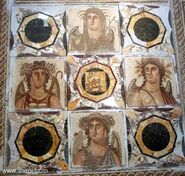 Depiction of the Horae representing the 4 seasons 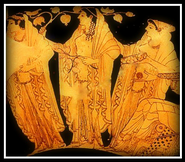 Depiction of a Horae triad on a vase

Horae of the Hours

The elder Twelve Horae are daughters of Chronos and Ananke and sisters to Aether, personification of the upper air. These Horae accompanied Helios out into the sky.

Horae of the Seasons

The younger Horae are daughters of Zeus and Themis. They are also considered to be sisters of the Fates, Nemesis, and Tyche. These Horae helped with the movement of the stars, the change of seasons, and agriculture. They number between 4 to 11 total, depending on if harvestimes are included.