The hearth and its fire

In Greek mythology, Hestia is the virgin Goddess of the Hearth, fire, home, protection, architecture, domesticity and virginity. Equated with the Roman Vesta, Hestia was the patron goddess of the oikos or the Greek household; at the hearth of every Greek house was placed an altar for sacrifice, where the first part always went to Hestia. Establishment of a new colony required flame from her hearth to be transferred to the location before any actual settlement could begin.

In myth, Hestia was the first-born child of Cronus and Rhea, swallowed by her father at birth. Later, when Zeus forced the Titan to disgorge his siblings, she was the last to emerge; for this reason she was seen as simultaneously the eldest and youngest of the six Kronides. With Zeus' permission, Hestia pledged to remain a virgin divinity, in line with Artemis and Athena.

Hestia had no personal emblem for herself, signifying her modesty; the hearth and its fire sufficed for her. Instead of a regal throne, Hestia sat on a plain chair with a woolen cushion. Although, as one of the six children of Cronus, Hestia had a place amongst the Olympians, she gave up her seat in favor of Dionysus, son of Zeus and Semele.

Hestia's name means "hearth, fireplace, altar", stemming from the PIE root *wes, "burn" (ult. from *h₂wes- "dwell, pass the night, stay"). It thus refers to the oikos, the domestic, home, household, house, or family. "An early form of the temple is the hearth house; the early temples at Dreros and Prinias on Crete are of this type as indeed is the temple of Apollo at Delphi which always had its inner hestia". The Mycenaean great hall (megaron), like Homer's hall of Odysseus at Ithaca, had a central hearth. Likewise, the hearth of the later Greek prytaneum was the community and government's ritual and secular focus.

Hestia's name and functions show the hearth's importance in the social, religious, and political life of ancient Greece. The hearth was essential for warmth, food preparation, and the completion of sacrificial offerings to deities. She was also offered the first and last libations of wine at feasts. Her own sacrificial animal was a domestic pig. The accidental or negligent extinction of a domestic hearth-fire represented a failure of domestic and religious care for the family; failure to maintain Hestia's public fire in her temple or shrine was a breach of duty to the broad community. A hearth fire might be deliberately, ritually extinguished at need, and its lighting or relighting should be accompanied by rituals of completion, purification and renewal, comparable with the rituals and connotations of an eternal flame and of sanctuary lamps. At the level of the polis, the hearths of Greek colonies and their mother cities were allied and sanctified through Hestia's cult. Hestia's nearest Roman equivalent, Vesta, had similar functions as a divine personification of Rome's "public", domestic, and colonial hearths, and bound Romans together within a form of extended family. The similarity of names between Hestia and Vesta is, however, misleading: "The relationship hestia-histie-Vesta cannot be explained in terms of Indo-European linguistics; borrowings from a third language must also be involved," according to Walter Burkert.

Responsibility for Hestia's domestic cult usually fell to the leading woman of the household, sometimes to a man. Hestia's rites at the hearths of public buildings were usually led by holders of civil office; Dionysius of Halicarnassus testifies that the prytaneum of a Greek state or community was sacred to Hestia, who was served by the most powerful state officials. Evidence of her priesthoods is extremely rare. Most stems from the early Roman Imperial era, when Sparta offers several examples of women with the priestly title "Hestia"; Chalcis offers one, a daughter of the local elite. Existing civic cults to Hestia probably served as stock for the grafting of Greek ruler-cult to the Roman emperor, the Imperial family and Rome itself. In Athens, a small seating section at the Theatre of Dionysus was reserved for priesthoods of "Hestia on the Acropolis, Livia, and Julia", and of "Hestia Romaion" ("Roman Hestia", thus "The Roman Hearth" or Vesta). A priest at Delos served "Hestia the Athenian Demos" (the people or state) "and Roma". An eminent citizen of Carian Stratoniceia described himself as a priest of Hestia and several other deities, as well as holding several civic offices. Hestia's political and civic functions are further evidenced by her very numerous privately funded dedications at civic sites, and the administrative rather than religious titles used by the lay-officials involved in her civic cults.

Pausanias writes that the Eleans sacrifice first to Hestia and then to other gods.

Athenaeus, in the Deipnosophistae, writes that in Naucratis the people dine in the Prytaneion on the natal day of Hestia Prytanitis (Ancient Greek: Ἑστίας Πρυτανίτιδος).

Every private and public hearth or prytaneum was regarded as a sanctuary of the goddess, and a portion of the sacrifices, to whatever divinity they were offered, belonged to her. A statue of her reportedly existed in the Athenian Prytaneum:

"Hard by is the Prytaneon (Prytaneum) [the town-hall of Athens] . . . and figures are placed of the goddesses Eirene and Hestia."

There was however very few temples dedicated to Hestia. Pausanias mention only two, in Ermioni and in Sparta:

Hestia's parents is Cronus and Rhea. Her siblings are Hades, Poseidon, Demeter, Zeus and Hera. She has no children and lover because she is a swore to be a virgin forever and ever.

Hestia is a kind, forgiving goddess and has a discrete character. She never left her residence, the sacred mountain of Olympus and never participated in any disputes or wars. For this reason, all Olympian gods respect and love her. 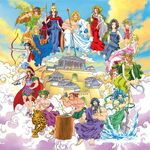