Myths and Folklore Wiki
Register
Don't have an account?
Sign In
in: Gods, Egyptian gods, Egyptian mythology,
and 3 more

Hepu (Apis or Hapis in Greek, alternatively spelled Hapi-ankh) is a bull-deity in Egyptian mythology, which was mainly worshiped in the Memphis region of ancient Egypt.

Hepu, as a deity, was worshiped since the beginnings of Egyptian history with a cult forming during that period.

When Egypt was absorbed into Alexander the Great's Macedonian empire, he and his successor in Egypt, Ptolemy I, sought to integrate the local religion with that of their rulers. The Hellenistic Greeks had little respect for animal-headed gods, so Apis was combined with Osiris to make the deity Osiris-Apis, later becoming Serapis, which alse eventually became a Roman deity.

A character in Greek mythology by the name of Apis is a son of Phoroneus and King of Argos. He was succeeded by his brother Argos. 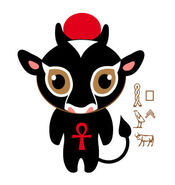