Myths and Folklore Wiki
Register
Don't have an account?
Sign In
in: European creatures, Greek creatures, Dogs,
and 4 more

A Hellhound is a supernatural dog in folklore that originates from the Underworld. A wide variety of ominous or hellish supernatural dogs occur in mythologies around the world. The Hellhound has been seen several times throughout history, and it is not specific to any one place, but they are commonly associated with graveyards and the underworld. The most recent sightings occurred in Connecticut, Kentucky, Louisiana, Ohio, and Vilseck, Germany, in or near cemeteries.

While considered a bad omen, the hellhound has often helped many as well. The supernatural dog was said to warn people of danger and protect them when they needed it. The dog is often very loyal to those who call upon one and is said to be very watchful. While the creatures are often known as evil, they are not as evil as one would suggest. For example, the Welsh "Cwn Annwn" (Hounds of the Welsh Underworld) were actually believed to be benign. However, encountering them was still considered a sign of imminent death.

Seeing a hellhound or hearing one howl may be an omen or even a cause of death. Hellhounds are called The Bearers of Death because they were supposedly created by ancient demons to serve as heralds of death. According to legend, seeing one leads to a person's death. Sometimes it is said to be once; other times it requires three sightings for the curse to take effect and kill the victim. These factors make the Hellhound a feared symbol of bad things that are about to happen.

They often get assigned to guard the entrances to the world of the dead, such as graveyards and burial grounds or undertake other duties related to the afterlife or the supernatural.

Hellhounds not only are guards for cemeteries but they are often seen as helper dogs for those who are about to pass. But they also can show up to said loved ones and sort of inform them or a loved ones passing.

Hellhounds have been said to be as black as coal and smell of burning brimstone. They tend to leave behind a burned area wherever they go. Their eyes are a deep, bright, and almost glowing red.

Other features that have been attributed to hellhounds include glowing red - or sometimes yellow - eyes, razor sharp teeth, super strength or speed, ghostly or phantom characteristics, foul odor, and sometimes even the ability to talk. In cultures that associate the afterlife with fire, hellhounds may have fire-based abilities and appearance.

While most pictures show the Hellhound as being evil and vicious, this is simply not the case. Hellhounds do not have to be evil looking or scary looking. They can look like any large dog only with pure black fur. 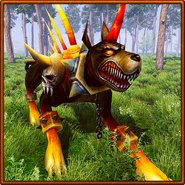 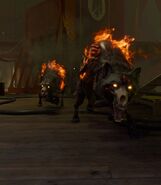 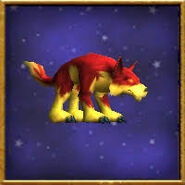 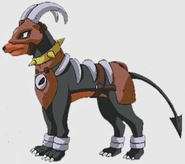 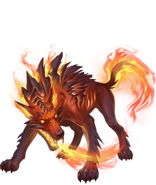