Myths and Folklore Wiki
Register
Don't have an account?
Sign In
Advertisement
in: Greek mythology, Greek people, Spartans,
and 9 more

In Greek mythology, Helen of Troy (Ancient Greek: Ἑλένη Helénē, pronounced [helénɛː]), also known as Helen of Sparta, was said to have been the most beautiful woman in the world. She was married to King Menelaus of Sparta but was abducted by Prince Paris of Troy after the goddess Aphrodite promised her to him in the Judgement of Paris. This resulted in the Trojan War when the Achaeans set out to reclaim her. She was believed to have been the daughter of Zeus and Leda, and was the sister of Clytemnestra, Castor and Polydeuces, Philonoe, Phoebe and Timandra.

Elements of her putative biography come from classical authors such as Aristophanes, Cicero, Euripides, and Homer (in both the Iliad and the Odyssey). Her story reappears in Book II of Virgil's Aeneid. In her youth, she was abducted by Theseus. A competition between her suitors for her hand in marriage saw Menelaus emerge victorious. An oath sworn by all the suitors (known as the Oath of Tyndareus) required all of them to provide military assistance to the winning suitor, whomever he might be, if she were ever stolen from him; the obligations of the oath precipitated the Trojan War. When she married Menelaus she was still very young; whether her subsequent departure with Paris was an abduction or an elopement is ambiguous (probably deliberately so).

The legends of Helen in Troy are contradictory: Homer depicts her as a wistful, even sorrowful figure, who came to regret her choice and wished to be reunited with Menelaus. Other accounts have a treacherous Helen who simulated Bacchic rites and rejoiced in the carnage she caused. Ultimately, Paris was killed in action, and in Homer's account Helen was reunited with Menelaus, though other versions of the legend recount her ascending to Olympus instead. A cult associated with her developed in Hellenistic Laconia, both at Sparta and elsewhere; at Therapne she shared a shrine with Menelaus. She was also worshipped in Attica and on Rhodes.

Her beauty inspired artists of all times to represent her, frequently as the personification of ideal human beauty. Images of Helen start appearing in the 7th century BCE. In classical Greece, her abduction by Paris – or escape with him – was a popular motif. In medieval illustrations, this event was frequently portrayed as a seduction, whereas in Renaissance paintings it was usually depicted as a "rape" (i.e. abduction) by Paris. Christopher Marlowe's lines from his tragedy Doctor Faustus (1604) are frequently cited: "Was this the face that launched a thousand ships / And burnt the topless towers of Ilium?"

She was married to Menelaus, king of Sparta, but either ran away or was abducted by Paris, a prince of Troy. When Menelaus returned from a trip to Crete, he was enraged to find she was missing and consulted his brother, Agamemnon. The two of them led the combined forces of the Greek city-states against the might of Troy and her allies. She is widely known as 'the face that launched a thousand ships".

Helen of Troy by Evelyn De Morgan (1898, London); Helen admiringly displays a lock of her hair, as she gazes into a mirror decorated with the nude Aphrodite. 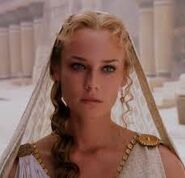