Myths and Folklore Wiki
Register
Don't have an account?
Sign In
Advertisement
in: Stubs, Titans, Goddesses,
and 10 more

Perses and Asteria or Nyx

None or Aether, Hypnos, Thanatos, the Fates, Eris, Nemesis and others

This article about Hecate is a stub. You can help Myths and Folklore Wiki by expanding it.

Hekate, or Hecate is the Goddess of Witchcraft, magic, sorcery, necromancy, the night, the dark side of the moon, ghosts, crossroads, trivial knowledge, herbalism, witches and the underworld, often seen as a threefold goddess like the phases of Moon; the Crone (full), The Mother (half), and The Maiden (quarter). She is technically a Titan of old, and is the daughter of Perses and Asteria. According to myth, as Asteria was a sister of Leto, she is a cousin of Artemis and Apollo, two powerful Olympian gods in their own right. She is usually depicted carrying two torches and surrounded by wolves or dogs.

In myth, Hecate was the goddess of the underworld and accompanies Persephone throughout the Underworld. Crossroads are also sacred to her and she was known as Trivia in Roman mythology (She of the three ways). She was also a protection goddess and associated with dogs. When Phillip of Macedon besieged Byzantium, the Byzantines heard dogs in the street barking at the approach of his army. The Byzantines and Athenians defended the city successfully and such success was attributed to her. In gratitude, the Byzantines erected a statue of her.

She is also considered Medea's patroness, and is said to have taught Medea how to create deadly poisons and drugs in many variants of the Jason and the Argonauts myth. 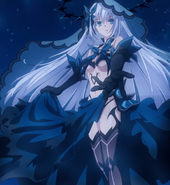