Myths and Folklore Wiki
Register
Don't have an account?
Sign In
Advertisement
in: American creatures, English creatures, Ghosts,
and 4 more

The Headless Horseman is a mythical figure in English and American folklore] since the Middle Ages.[1] This entity is very similar to the headless reapers or demonic fairy known as Dullahan in Irish myth.

The most commonly known examples of the Headless Horseman is from the American tale "The Legend of Sleepy Hollow" by Washington Irving, and the English tale "Sir Gawain and the Green Knight."

The 14th century poem Gawain and the Green Knight features a headless horseman who is the titular giant knight. After he is beheaded by Gawain, the Green Knight lifts his own head up with one hand and rides from the hall, challenging Gawain to meet him again one year later.[2]

The most prominent Scots tale of the headless horseman concerns a man named Ewen decapitated in a clan battle at Glen Cainnir on the Isle of Mull. The battle denied him any chance to be a chieftain, and both he and his horse are headless in accounts of his haunting of the area.[3]

There is also The Headless Horseman by Mayne Reid, first published in monthly serialized form during 1865 and 1866 and was based off of his adventures in the US, which was later published as a book in 1866. Also known as "A Strange Tale of Texas,", Reid wrote of the local Texan folktale of their own headless horseman based on the author's adventures in the United States.[4]

The Legend of Sleepy Hollow[]

The legend of the Headless Horseman (also known as "the Headless Hessian of the Hollow") begins in Sleepy Hollow, New York, during the American Revolutionary War. Traditional folklore holds that the Horseman was a Hessian trooper who was killed during the Battle of White Plains in 1776. He was decapitated by an American cannonball,[5] and the shattered remains of his head were left on the battlefield while his comrades hastily carried his body away. Eventually they buried him in the cemetery of the Old Dutch Church of Sleepy Hollow, from which he rises as a malevolent ghost, furiously seeking his lost head. Modern versions of the story refer his rides to Halloween, around which time the battle took place.[6]

Headless Horseman in Scooby-Doo! and the Goblin King 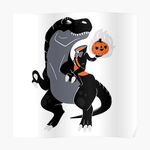