Haumea (pronounced həuˈmɛjə) is the Hawaiian goddess of fertility and childbirth. She is also the mother of many other Hawaiian deities.

Originally, Hawaiian myth tells us human women could not give birth. They swelled with pregnancy and, when it was time for delivery, they were cut open – a dangerous procedure. But the Goddess Haumea came to their rescue, teaching women how to push the child out between their legs.

Haumea was ever-renewing rather than ageless. She frequently grew old, but often transformed herself into a a young woman. Generations went by and still she lived among humans, sleeping with the handsome young men even when they were her grandchildren and distant descendants.

Birth of her Children

Haumea was reported to be extremely skilled in childbirth. Because of that, children weren’t born of her from mere traditional methods. Instead, they sprang from different parts of Her body. One Hawaiian legend claims that Pele was born from Her mother’s armpit, while another states that She came from a flame out of the Goddess’s mouth. 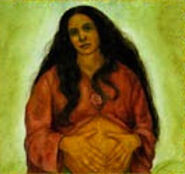