Myths and Folklore Wiki
Register
Don't have an account?
Sign In
in: Goddesses, Vanir, Fortune goddesses,
and 6 more

In Norse mythology, Gullveig is a being who was speared by the Æsir, burnt three times, and yet thrice reborn. Upon her third rebirth, Gullveig's name becomes Heiðr and she is described as a knowledgeable and skillful völva. Gullveig/Heiðr is solely attested in the Poetic Edda, compiled in the 13th century from earlier traditional material. Scholars have variously proposed that Gullveig/Heiðr is the same figure as the goddess Freyja, that Gullveig's death may have been connected to corruption by way of gold among the Æsir, and/or that Gullveig's treatment by the Æsir may have led to the Æsir–Vanir War.

Gullveig is solely attested in the Poetic Edda poem Völuspá. In the poem, a völva recalls that Gullveig was pierced by spears before being burnt three times in the hall of Hárr (Hárr is one of Odin's various names), and yet was three times reborn. The völva says that, presumably after Gullveig's burning, she was called Heiðr and that Heiðr was a knowledgeable völva who could perform great feats:

A description of the Æsir-Vanir War follows and the poem continues thereafter.

Starting with scholar Gabriel Turville-Petre, scholars such as Rudolf Simek and John Lindow have theorized that Gullveig/Heiðr is the same figure as Freyja, and that her involvement with the Æsir somehow led to the events of the Æsir–Vanir War. 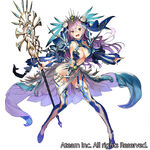 Gullveig - The Maiden Prophetess
This page uses content from Wikipedia. The original article was at Gullveig (view authors). As with Myths and Folklore Wiki, the text of Wikipedia is available under the Creative Commons Attribution-Share Alike License 3.0 (Unported).
Community content is available under CC-BY-SA unless otherwise noted.