The Grafton Monster, also known as the "Beast of Grafton," is a large humanoid cryptid that's said to stalk the forests outside the town of Grafton, West Virginia- a former railroad boomtown located in the United States. It was originally sited in 1964 by Robert Cockrell, who worked as a reporter for the Grafton Sentinel.[1]

According to Cockrell, the monster was "huge," had no visible head, and had slick, seal-like skin.[1] His account was dismissed by the editors at his work, but news of the monster soon gained popularity throughout West Virginia, leading to large search parties aimed at finding the creature.[1] Today, the monster is still a popular cryptid in the area, and Grafton is a tourist stop for cryptid enthusiasts.[1]

The monster is claimed to be a large, humanoid bipedal creature with no visible head, and covered in slick, white seal-like skin.[1] It's unclear though if it actually doesn't have a head or if its head is simply located close to its chest. In an article by the Grafton Sentinel published on June 18th, 1964, an anonymous teenager claimed the creature was "nine feet tall and about four feet wide."[2]

On June 16, 1964, at around 11pm, Robert Cockrell, a reporter for the Grafton Sentinel newspaper, was driving along the Tygart River on Route 119, known as Riverside Drive, on his way home from work. There Cockrell suddenly encountered a large, white creature on the righthand side of the road, which was the side that the Tygart River was located.[3]

Surprised by the encounter, Cockrell initially slowed down, and he was able to see that the creature was very large and appeared to be made entirely of muscle.[3] It also had white, seal-like fur, and disturbingly, didn't appear to have a visible head.[3] The creature moved quickly out of view, and upon realizing that the white obstruction was a living creature, he quickly accelerated down the road until he reached home.[3]

Once home, Cockrell called two of his friends: Jerry Morse and Jim Mouser.[1] Cockrell explained his sighting to them and asked them to come with him to the location of the sighting in order to investigate further.[1] They agreed, but when they returned to the sight all they were able to find was trampled grass and a low whistling sound that seemed to follow them around the site.[1]

The next day at work, Cockrell mentioned to his editor Grafton Sentinel of what he had seen, but the editor did not take the sighting seriously.[3] Cockrell assumed that nothing more would come of his sighting after that point.[3] Cockrell's friends however, were fascinated with the idea of a monster on the loose and went around town telling as many people as they could.[3] In very short time, monster hunting parties formed, predominantly made up of local teens armed in baseball bats or whatever they could find.[3]

These roving groups of teens scoured Riverside Drive, near where where Cockrell has initially seen the creature, and soon new sightings were being reported.[1] Spurred by the commotion and by new sighting, the Grafton Sentinel interviewed some of the teenagers and produced an article about the creature on June 18th, 1964 titled "Teen-Age Monster Hunting Parties Latest Activity on Grafton Scene."[1]

More than twenty sightings were reported from this monster hunt, which Robert Cockrell interviewed in detail. Below are two of those alleged sightings:

Due to the large amount of people-turned-monster-hunter bringing loaded guns into the area, and with tensions rising, the police undertook their own investigation. The next day, June 19, the Grafton Sentinel printed another article on the subject, dismissing the monster as simply the result of "spring fever" as bored locals wildly imagined the creature, which was instead a handcart piled high with boxes. With this information, the town was finally able to calm down, and everyone (especially authorities) was relieved that no one had been shot or hurt during the monster hunts.

One teen in 1964 initially suggested the creature was an escaped polar bear, but no one could determine where or what a polar bear was doing in Grafton, West Virginia.

The Grafton Sentinel posted on Jun 19th that the alleged monster was simply from an individual who had been pushing a handcart loaded high with boxes along Riverside drive on Tuesday night. The newspaper claimed that due to the dim lighting and the "wildly imaginative" teens, this handcart was the most likely cause for the story and sightings. The paper then stated: "It's fairly certain that "monsters” don’t go around pushing handcarts loaded with boxes." 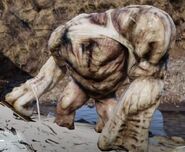 The Grafton Monster as depicted in Fallout 76