Myths and Folklore Wiki
Register
Don't have an account?
Sign In
Advertisement
in: Gnomes, Earth spirits, Fairies,
and 4 more

Gnomes are very widespread species, known to a number of human races. Believed to originate from Scandinavia, Gnomes later migrated to the lowlands some 1500 years ago.

Germans name them Erdmanleins, except in the Alpine areas, where they are called Heinzelmannchen. In Denmark and Norway they are Nisse; Nissen is a Swedish variation. In Britain they are called Nains and Tontti to the Finns. The Polish call they by the familiar Gnom. Bulgaria and Albania, however, use Dudje. In Hungary, Yugoslavia, and Czechoslovakia, Gnomes are called Mano. The Dutch use Kabouter and the Belgian, Skritek. Switzerland and Luxembourg use the same name, Kleinmanneken, which means "little men." Domovoi Djedoes is used in western Russia.

Gnomes consist of a number of different types. The most common is the Forest Gnome who rarely comes into contact with man. The Garden Gnome lives in old gardens and enjoys telling melancholy tales. Dune Gnomes are slightly larger than their woodland brethren and choose remarkably drab clothing. House Gnomes have the most knowledge of man, often speaking his language. It is from this family that Gnome Kings are chosen. Farm Gnomes resemble their House brethren, but are more conservative in manner and dress. Siberian Gnomes have been more interbred than other Gnomes and associate freely with trolls . They are much larger than the other types and have an infinitely more nasty nature. It is best never to evoke the ire of such Gnomes for they delight in revenge.

Gnomes tend to live in hilly meadows and rocky woodlands. In Huygens's book, it says they live in three trees, the house itself, with a hidden entrance from another tree, and then a third is the supply room, with grains, beans, potatoes and everything else the gnomes may need during the winter.

Gnomes are usually an average of 15 centimeters tall (but in some stories they are said to be around a foot (30 cm) in height), but with its cap on it appears much taller. Their feet are somewhat pigeon toed which gives them an extra edge on speed and agility through the wood and grass. The males weigh 300 grams, and female is 250-275 grams. The male wears a peaked red cap, a blue brown-green pants, and ether felt boots, birch shoes, or wooden clogs. Around his waist is a belt with a tool kit attached, holding a knife, hammer, etc. They are fair of face, though the boast rosy red cheeks. Long beards adorn their faces and turn gray far sooner than their hair.

The females wear gray or khaki clothing, consisting of a blouse and skirt (to ankles). She also has black-gray knee socks and high shoes or slippers. Before she is married, she dons a green cap. Prior to marriage her hair in hanging down, the outfit is complemented by a green cap and braids with which later disappear under a scarf while the green cap is replaced by more somber tones after she marries.

Most Gnomes are 7 times stronger than a man, can run at speeds of 35 miles per hour, and have better sight than a hawk. These abilities help the Gnome to do many things, such as find wounded, dying animals for which they feel they are responsible for. Because of their love for animals, all the animals of the forest are the Gnome's friends and are willing to help him at any time. Many people say that gnomes have elevated practical jokes to an art form. But most especially they love gems and jewelry and are considered by many to be the best gem cutters and jewelers in existence.

Males are the guardians of animal kind and show little preference for their animal friends, not withstanding their aversion to cats both wild and domesticated. They are known for freeing wildlife from man's traps and for operating on farm animals whose owners have neglected them or who are simply to poor to afford a veterinarian. Their enemies are mainly Trolls, and other beings who would try to destroy them or their homes. Otherwise, they are mostly peaceful beings.

They are generally vegetarian with their main meal consisting of: Nuts (hazelnuts, walnuts, beechnuts, etc), mushrooms, peas, beans, a small potato, applesauce, fruit, berries (all kinds), tubers, spices, vegetables, and preserves for dessert. As a beverage, the gnome drinks mead dew (fermented honey), fermented raspberries (which have a very high alcohol content), and spiced gin as a nightcap. The gnome eats no meat, so often consumes the nectar of the high protein plant called 'Vicia Sepium'. fluffy willow catkins, dressing them up like dolls.

The history of gnomes

The text above me tells of the adaptation of gnomes in Romanticism and modern fantasy tales, often known as garden gnomes, but the actual gnomes are much more ancient.

A gnome is a diminutive spirit in Renaissance magic and often in alchemy, living underground. They are often mentioned as one of the four spirits of the four elements, making them: salamander=fire, gnome=earth, undine=water and silph=air.

They dwell underground an die there as well. Ancient and dark, they often wear monk robes. They are usually small and humpbacked, but may become giants.

The word comes from the Renaissance Latin gnomus, which first appears in the works of 16th Century Swiss alchemist Paracelsus. He is perhaps deriving the term from Latin gēnomos (itself representing a Greek γη-νομος, literally "earth-dweller"). Alternatively, the term may as well be an original invention of Paracelsus. He classifies them as earth elementals, and describes them as two spans high, reluctant to interact with humans and able to move through solid earth.

The chthonic spirit has precedents in numerous ancient and medieval mythologies, often guarding mines and precious underground treasures, notably in the Germanic dwarves and the Greek Chalybes, Telchines or Dactyls. 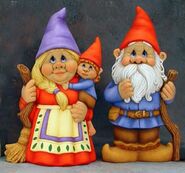 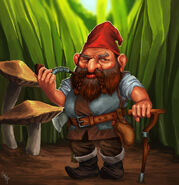 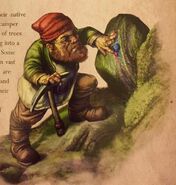