Myths and Folklore Wiki
Register
Don't have an account?
Sign In
Advertisement
in: Stubs, Greek mythology, Roman mythology,
and 10 more

This article about Erinyes is a stub. You can help Myths and Folklore Wiki by expanding it.

The Erinyes (singular: Erinys) are Greek goddesses or spirits residing in the Underworld. They punish those who swear false oaths and those who commit heinous crimes. Their name can be translated to English as "Avengers."

They are most well known for pursuing Orestes for the crime of matricide, even though he was avenging the death of his father Agamemnon. Orestes was later pardoned in the court of the gods. In Roman mythology, they are known as the Furies, or Dirae.

Their parentage is disputed. In some accounts their parents are Nyx and Erebus, while in others they are born from the blood of Ouranós when he was castrated by Cronus.

The exact number of Erinyes is indefinite, but only three are named:

Eriynes in the "Mission Odyssey." 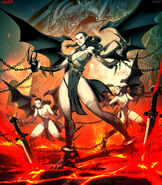 "The Erinyes" by the artist Genzoman

The Furies (The Erinyes) from the game Hades, art by Jen Zee