Myths and Folklore Wiki
Register
Don't have an account?
Sign In
Advertisement
in: Personifications of death, Psychopomps

Death is a spectral entity from Western mythology that is said to be the sentient manifestation of death itself. Since the 15th century, Death has commonly been perceived to be an animated human skeleton, draped in pitch black robes and carrying a scythe. With this scythe, the Reaper severs the soul's last ties to life and grants the soul safe passage to the afterlife. He also carries an hourglass, representing the sands of time ticking away until his arrival.

Death has often falsely been depicted as an evil spirit that preys on mortals. In truth, however, he is neither evil nor good, merely a force of nature and order. Death is a fundamental part of life and it is Death's duty to claim the souls of the deceased so as to maintain the balance of nature. He does not "kill" mortals, he merely guides their spirits to the next realm and it is not his place to judge souls or determine what will become of them. 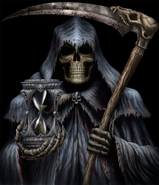 Mortarion, Primarch of the 14th Space Marine Legion Death Guard, was based on the Grim Reaper himself.

The Grim Reaper in The Hollow 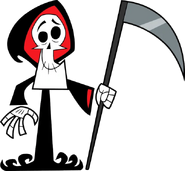 Death, the keeper of Dracula's castle and his loyal servant in Castlevania series. 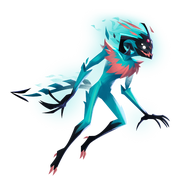