Myths and Folklore Wiki
Register
Don't have an account?
Sign In
Advertisement
in: Titans, Gods of Sky and Weather, Children of Gaia, Greek mythology 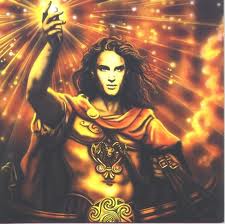 Crius was also known as the Pillar of the South pole. He and with his brothers; Iapetus, Hyperion and Coeus, represented the pillars of cardinal points where they held down Ouranós as Cronus castrated him.(the heavens) and Gaea (the earth) apart.