Myths and Folklore Wiki
Register
Don't have an account?
Sign In
Advertisement
in: Greek mythology, Gods of Death, Gods of Underworld

Charon (Ancient Greek: Χάρων (Khárōn)) is the ferryman of the underworld. For a fee, he would bring the dead across the River Styx that separated the world of the living from the world of the dead. Those who could not pay the fee were forced to wander the shores of the river as Wraiths for eternity (or one hundred years depending on the recount). In the catabasis mytheme, heroes — such as Heracles and Dionysus — journey to the underworld and return, still alive, conveyed by the ferry of Charon.

In various depictions, Charon is just an old man who ferries the living through the river styx. In other depictions, he is shown as an undead, with grotesque traits, and is sometimes depicted as been attached to the boat by his torso, essentially ending in him been the boat himself. 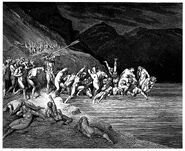 In the Divine Comedy, by Gustave Doré (1857), Charon forces reluctant sinners onto his boat by beating them with his oar

Michelangelo's Charon, from the Last Judgment

Charon in Once Upon a Time

Charon in God of War: Chains of Olympus