Myths and Folklore Wiki
Register
Don't have an account?
Sign In
in: Fairies, Celtic mythology, English mythology,
and 21 more

Changelings are creatures spoken of in many folklore, fantasy and fairy tales from across European mythology- they are regarded as creatures that are placed into mortal homes by fairys or demons, who proceed to kidnap the original child of the home.

Changelings are often said to exhibit odd behavior or have traits that are not normally found in human young (such as having extra toes): some tales also spoke of Changelings that had voracious appetites, unnatural knowledge and imp-like traits that made them more mischievious and/or disturbing to their mortal "parents".

One belief is that fairy swapped their own children (the Changelings) with a human child, as it was more respectable to be raised by humans. In others, they wanted beautiful human children for their own. Beauty in human children and young women, particularly blond hair, was said to attract the fairies who kidnap human children.

In Scottish folklore, the children might be replacements for fairy children in the tithe to Hell according to the ballad of Tam Lin.

Other folklores say that human milk is necessary for fairy children to survive. In these cases either the newborn human child would be switched with a fairy baby to be suckled by the human mother, or the human mother would be taken back to the fairy world to breastfeed the fairy babies. It is also thought that human midwives were necessary to bring fairy babies into the world.

Some stories tell of Changelings who either are unaware or forget that they are not human and proceed to live a human life. Changelings which do not forget however, in some stories return to their fairy family. More often than not, the human child that was taken often stay with fairies forever.

To ward off Changelings people would often put small trinkets in beside their infants and later it was considered wise to baptize one's young as it was believed creatures such as trolls would only take unbaptized children.

In Nordic traditional belief, it was generally believed that it was trolls or beings from the underground that changed children.

Since most beings from Scandinavian folklore are said to be afraid of iron, Scandinavian parents often placed an iron item such as a pair of scissors or a knife on top of an un-baptized infant's cradle. It was believed that if a human child was taken in spite of such measures, the parents could force the return of the child by treating the changeling cruelly, using methods such as whipping or even inserting it in a heated oven. In at least one case in Sweden during WWII, a woman was taken to court for having killed her child in an oven.[1]

In one Swedish tale, the human mother is advised to brutalize the changeling (bortbyting) so that the trolls will return her son, but she refuses, unable to mistreat an innocent child despite knowing its nature. When her husband demands she abandon the changeling, she refuses, and he leaves her – whereupon he meets their son in the forest, wandering free. The son explains that since his mother had never been cruel to the changeling, so the troll mother had never been cruel to him, and when she sacrificed what was dearest to her, her husband, they had realized they had no power over her and released him.[2]

the tales of Changelings were also a contributor to very real neglect, cruelty and even murder amongst certain individuals - as many children (often disabled and/or of ill health) suspected of being "changelings" were subjected to harsh treatment by superstitious communities wishing to rid themselves of what they believed to be a malevolent or unwanted intruder.

Some folklorists also believed that Changelings were leftover stories of inhabitants of various regions in Europe who had been driven into hiding by invaders. They held that changelings had actually occurred; the hiding people would exchange their own sickly children for the healthy children of the invaders. 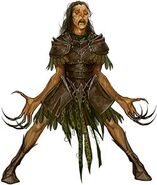 A Changeling can turn into a hag-riven in Pathfinder