Myths and Folklore Wiki
Register
Don't have an account?
Sign In
Advertisement
in: Chinese mythology, Lunar gods, Goddesses,
and 2 more

Goddess of the Moon

Chang'e (or Chang-O) is the Chinese goddess of the moon.

Long time ago, 9 suns scorched the Earth and burnt famers' crops. Hou Yi, an archer, was sent by the villagers to shoot them out of the sky. After he did his honor to protect the village, Hou Yi was rewarded the Elixir of Life by the gods. Hou Yi met Chang'e and quickly fell in love with her. He went to the gods and asked them for an Elixir of Immortality so that he could be forever together with Chang'e. The couple planned on drinking the elixir on the 15th of August while the moon was full (when the Mid - Autumn Festival is held today). A jealous man, Feng Meng, overheard their plan and tried to steal the elixir for himself. When Chang'e found out that Feng Meng had tried to steal the elixir, she had drunk the bottle by herself and was sent to the moon as an immortal deity, thus becoming the goddess of the moon. After realizing that Chang' e was gone, Hou Yi would offer food every year on the August 15, to honor his wife.

A series of Chinese lunar spacecraft are nicknamed Chang'e in reference to the goddess. The Mid -Autumn Festival is celebrated yearly on the 15th of August to honor her. She has appeared in many video games starring her as a main character. Chang'e also had a major appearance in the Netflix Movie, Over the Moon. 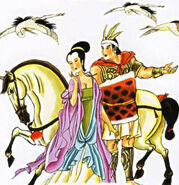 Chang'e as she appears from Smite.

Chang'e as she appears in the video game, Heroes of Camelot

Chang'e from the Netflix movie, Over the Moon

Chang'e from Over the Moon in her Moon goddess outfit

Chang'e from Over the Moon, before she became a goddess
Community content is available under CC-BY-SA unless otherwise noted.