The Centaurs (also known as Ixionidae) are a race of creatures that are part human and part horse. Their first appearance comes from early Greek archaeological finds in which Attic vase-paintings depicted the centaurs as the torso of a human joined at the waist to the horse's withers, where the horse's neck would be.

The centaurs were spawned by the cloud nymph Nephele, who was raped by the impious Lapith, King Ixion, which is the cause of the Centaurs' hatred for the Lapiths.

They inhabited the mountains and forests of Magnesia. They lived in mountain caves, hunted wild animals for food and armed themselves with rocks, tree branches and later built weapons of their own.

Centaurs are thought of in many Greek Myths as wild as untamed horses. Like the Titanomachy, the defeat of the Titans by the Olympian gods, the contests with the centaurs typify the struggle between civilization and barbarism.

The centaurs are best known for their fight with the Lapithae, caused by their attempt to carry off Hippodamia and the rest of the Lapith women, on the day of her marriage to Pirithous, king of the Lapithae, himself the son of Ixion. The strife among these cousins is a metaphor for the conflict between the lower appetites and civilized behavior in humankind. Theseus, a hero and founder of cities, who happened to be present, threw the balance in favor of the right order of things, and assisted Pirithous. The centaurs were driven off or destroyed.

Another Lapith hero, Caeneus, who was invulnerable to weapons, was beaten into the earth by centaurs wielding rocks and the branches of trees.

One ancient writer also mentions a tribe of bull-horned Centaurs native to the island of Kypros.

Theseus vs the Centaurs 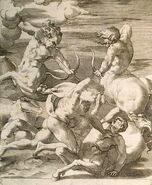 Hercules vs. the Centaurs 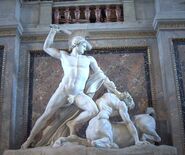 Drawing of Centaurs on a page spacer 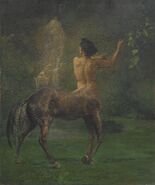 A family of Centaurs husband, wife and child. 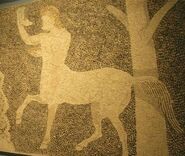 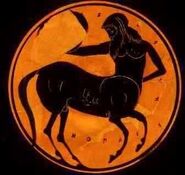 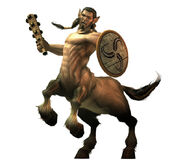 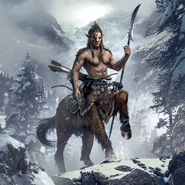 A centaur from the Elder Scrolls universe. 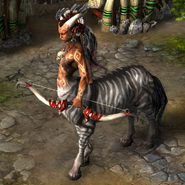 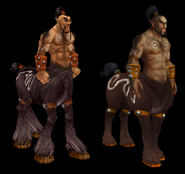 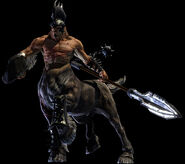 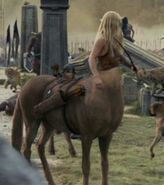 A female centaur in The Chronicles of Narnia.

Glenstorm from The Chronicles of Narnia: Prince Caspian movie. 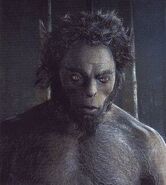 Firenze, a centaur in Harry Potter

Nessus, a centaur in Disney's Hercules.

Lord Tirek, a centaur in My Little Pony Friendship Is Magic. 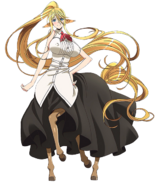